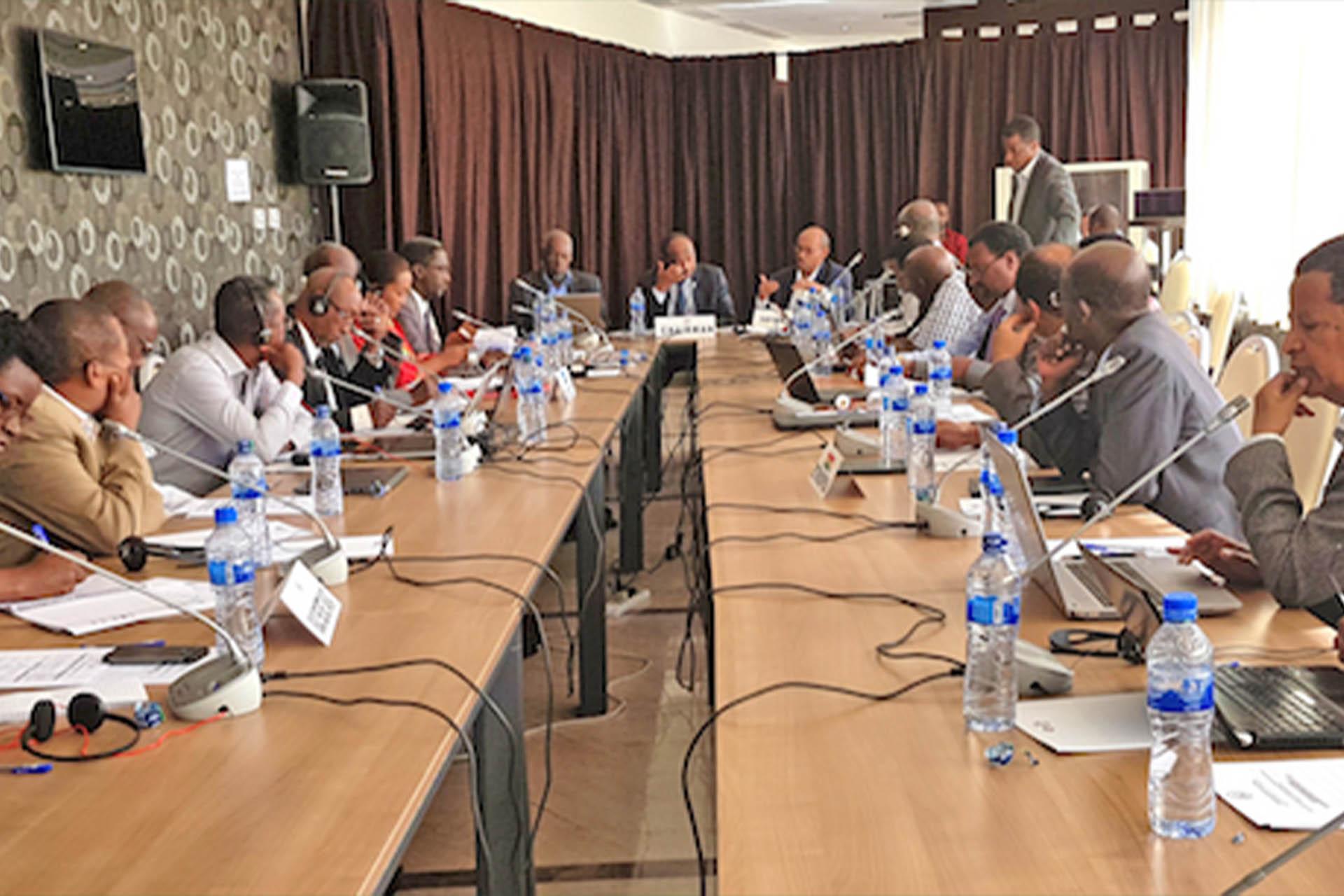 11 October 2018, Addis Ababa:  A two-day technical meeting has been convened by the Intergovernmental Authority on Development (IGAD) to discuss experiences gained in implementing cross-border development, identify challenges and opportunities for launching the  IGAD Cluster 4 (Dikhil), and agree on the modalities for cooperation and collaboration.

Ambassador Mohamoud Mohamed Dirir, the Director General of Neighbouring Countries and IGAD affairs at the Ethiopian Ministry of Foreign Affairs officially opened the meeting. He welcomed participants and reiterated the importance of the technical meeting, which pursued dialogue as a modality to build collaboration. He expressed hopes that this meeting would facilitate further cooperation and collaboration to address a diverse range of cross-border challenges, which include protracted inter- and intra-state conflict, proliferation of small arms and light weapons and the threat of violent extremism.

Speaking during the opening, Mr. Mohamed Moussa, the Director of the Agriculture and Environment Division of IGAD, explained the genesis of the IGAD Drought Disaster Resilience and Sustainability Initiative (IDDRSI), which was launched in 2011 at a Summit for Heads of State and Government from the IGAD and East African regions. “The Heads of State agreed that they have to work collectively because it was clear that each country alone, cannot manage to overcome the effects of recurrent drought disasters,” he said.

Mr. Moussa also briefed participants on IGAD’s mandate to lead the development and  implementation of the IDDRSI strategy and set up a mechanism through which it would coordinate its implementation. “It is now over five years since the launch of IDDRSI. We conducted a review of implementation of the first phase in all Member States, and we are now preparing the second phase,” he reported.

Building on past successes in cross-border programming

The vision of an integrated Africa, with borders serving as bridges for peace, growth and development, led to the adoption of African Union Convention on Cross-Border Cooperation, known as the Niamey Convention in 2014. The Niamey Convention aims to promote cross-border cooperation and to ensure peaceful resolutions of border disputes. Based on joint activities between neighbouring countries, it is to facilitate the development of borderlands and to ease free movements of person and goods.

While none of the IGAD Member States have signed and ratified the convention, the increased focus on policy formulation and investments targeting cross-border areas is indicative of their commitment to cross-border cooperation.

There are many examples that illustrate the successes of cross-border cooperation. In the IGAD region, they include conflict mitigation, led by Conflict Early Warning and Response Mechanism (CEWARN), the development of the Transhumance Protocol and addressing cross-border trade and animal health. Further afield, examples include the Rinderpest eradication spearheaded by the African Union and the tsetse fly eradication in Caprivi Strip, which was a result of collaboration between the Governments of Angola, Namibia and Botswana.

The IDDRSI is spearheading this approach, through projects such as the Regional Pastoral Livelihoods Resilience Project (RPLRP), funded by the World Bank. The European Union Trust Fund (EUTF) is also providing support through the Strengthening the ability of IGAD to promote resilience in the Horn of Africa, and the Support for Effective Collaboration and Cooperation in Cross-border Areas (SECCCI).

Ethiopia, Somalia and Djibouti have all made progress in implementing cross-border programmes. Some examples are as follows: With support from International Fund for Agricultural Development (IFAD), the Government of Djibouti is implementing a programme for food security and pastoral resilience in a region that covers Ethiopia, Djibouti and Northern Somalia.  In Ethiopia, among other things, the Ministry of Agriculture and Livestock Resources has MoUs with neighbouring countries, that make up the Karamoja Cluster – Kenya, Uganda and South Sudan. Cross-border collaboration is also being pursued under the IGAD-FAO Partnerships Programme. In Somalia (Somaliland), there have been interventions in rangeland and forest management, and MoUs have been developed with Djibouti  and Ethiopia for cross-border coordination of animal health, but none have been signed yet.

This activity was co-funded by the European Union (EU) and the German Federal Ministry of Economic Cooperation and Development  (BMZ).