Djibouti, Nov. 04, 2013: The Minister of Foreign Affairs of Somaliland, HEM Mohamed Bihi Yunis, today paid a courtesy call to IGAD Secretariat where he met with the Executive Secretary of IGAD, Ambassador Mahboub Maalim, along with Heads of various IGAD Divisions and Programs. 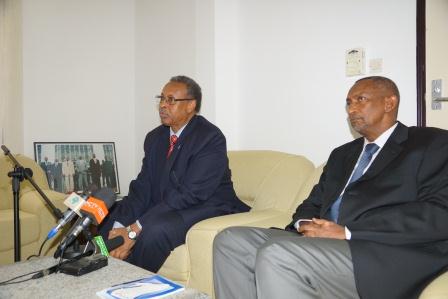 The two parties discussed issues of interest to Somaliland and IGAD. Ambassador Mahboub Maalim took the opportunity to welcome the delegation led by HEM Mohamed Bihi Yunis and thanked him for taking the time to meet on the day of the New Islamic Year.

Ambassador Mahboub Maalim then highlighted that a key project is being undertaken in Somaliland; the Berbera-Toggajaleh corridor is a European Union funded project facilitated by IGAD and whose feasibility study is under way at present time. Somaliland is also part of the drought resilience agenda of IGAD.

Following these brief remarks by the Executive Secretary, IGAD Heads of Divisions and Programs were invited to give concise overviews of their portfolios, which they did not miss doing by relating them to Somaliland.

On his side, HEM Mohamed Bihi Yunis extended greetings from the people and the President of Somaliland to IGAD leadership before stressing that Somaliland is grateful to IGAD Organization “as a pioneer in providing support to Somaliland”.

“We count on your regular support for the IGAD run programs in Somaliland and we’re committed to a sound use of the resources allocated to the development of our country,” he added.

The Minister of Foreign Affairs of Somaliland extended to the leadership of IGAD to once again an invitation to visit the institutions and the country of Somaliland.