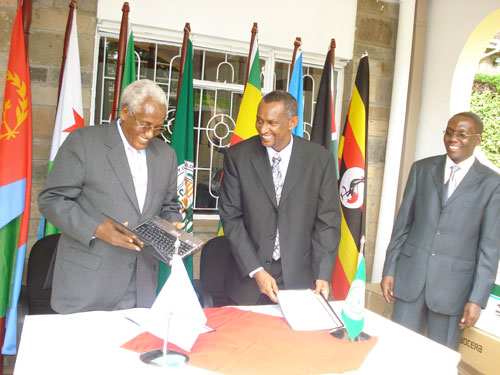 (IGAD – Nairobi; Kenya) The Permanent Secretary in the Ministry of Foreign Affairs of the Transitional Federal Government of Somalia received equipment and furniture to strengthen its headquarters in Mogadishu at a brief ceremony held in Nairobi this morning.

The equipment worth 25,000 US Dollars that included computers, laptops, printers, copiers, scanners as well as desks and chairs were presented to the Permanent Secretary, H.E. Amb. Abdisalam Haji Ahmed Liban by the Executive Secretary of the Inter Governmental Authority on Development (IGAD), Eng. Mahboub Maalim. Also present at the handing over ceremony were representatives of IGAD Member States and other invited guests.

In his welcoming remarks, the IGAD Executive Secretary said his organization was simply responding to a request made by the Somali Government as part of a broad institutional capacity building effort being implemented under the Office of IGAD Facilitator for Somalia Peace and Reconciliation.

“Though this is a modest donation, we hope other regional and international organizations will be encouraged to make similar contributions when called upon”, states Eng Mahboub Maalim, adding that the TFG was in dire need for support – morally, materially and otherwise.

Despite the insurgency waged against the TFG, several ministries are establishing their offices in Mogadishu and its environs to provide the much needed services to the Somali people. Peacekeeping troopers from the African Union Mission in Somalia (AMISOM) alongside security forces from the TFG have managed to secure part of the capital city.

“With support of AMISOM, we have secured the seaport, the presidential palace as well as several other government buildings and the international airport”, said Amb. Liban further pointing out that the TFG was grateful for the continued support it is receiving from neighbouring countries and the international community.

He thanked IGAD for responding promptly to their request for office equipment and furniture that will go a long way to ensure his ministry establishes itself and communicates effectively.

The Permanent Secretary appealed to other well wishers to emulate the example set by IGAD and respond positively to their numerous needs.