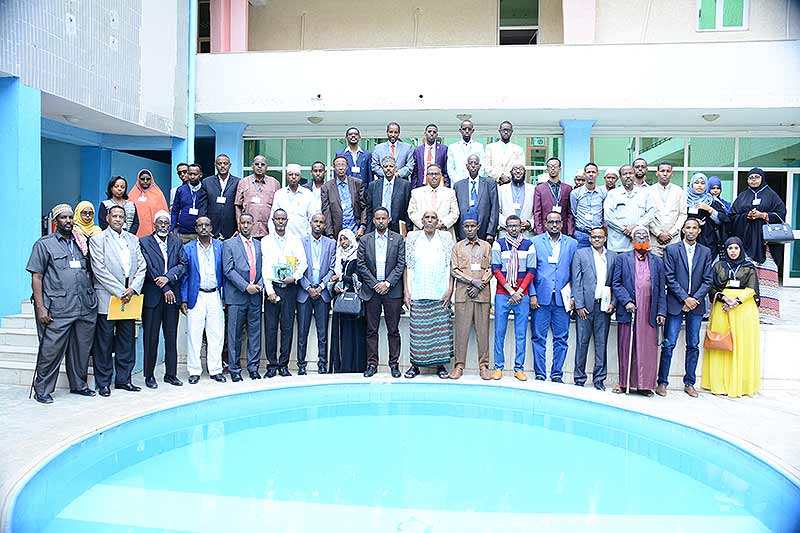 Second Round Training on Counter Radicalization, Disengagement, and Reintegration of Terrorist

Home » Second Round Training on Counter Radicalization, Disengagement, and Reintegration of Terrorist

The official opening ceremony was presided by Commander Abebe Muluneh, Director of IGAD SSP, who welcomed the participants and by H.E. Osman Aden Dubow – Deputy Minister of Endowment and Religious Affairs of Somalia, who appreciated IGAD for its continued support to Somalia especially in organizing such kind of training in two consecutive rounds bringing together religious scholars and other community representatives in order to create a common understanding in defeating Al-Shabaab.

Commander Abebe, in his opening remark, expressed his gratitude to the Government of Ethiopia for Hosting and the Government of Japan for their generous financial support in making the second round training a reality.  He further highlighted that the militant group Harakaat al-Shabaab al-Mujaahidiin (Al-Shabaab) remains the most immediate threat to the peace, security and stability of Somalia and the region. The movement and activity of Islamic State of Iraq and Levant (ISIL) members in some part of Somalia, the emergence of the Islamic State of Somalia (ISS), and the rise of Islamic State-affiliated groups in sub-Saharan Africa – Jahba East Africa, which is also known as the Islamic State of Somalia, Kenya, Tanzania and Uganda (ISISSKTU) have become a potential threatening phenomenon that needs urgent attention.  Commander Abebe pointed out that engaging with key community members that include religious leaders, the youth, and women hand in hand is very important in tackling the narratives and messaging of Al-Shabaab and other terrorist groups.

H.E. Osman thanked IGAD and appreciated the effort being made to the regional response in fighting Al-Shabaab.  He highlighted on the work the Ministry is doing and assured of his Ministry’s commitment and the Government of Somalia in providing the necessary mechanisms to enhance the capacity of its officials, and the community to eradicate and counter the narratives of extremist groups.

The objective of the training was to contribute to the fight against radicalization and countering terrorism in Somalia by providing knowledge, tools, and common understanding to traditional leaders in mobilizing the community through counter radical narratives that familiarize the dangers of religious extremism messages of Al-Shabaab and other groups.  Given the importance of community in Somalia society and roles of their leaders, IGAD strongly believes that community based de-radicalization is important and provides a venue for trust based and sustainable intervention.  IGAD also believes that unless more sensitization and fundamental work of disengagement is done with various communities, it is not possible to fully effectively defeat extremist narratives and remove the threats terrorist groups pose to Somalia and the region.  The training, was therefore, one of the efforts geared towards bringing about change in this regard.

The training brought together 60 participants from all the regions of Somalia who are religious scholars, traditional leaders, representatives of CSOs including women association, and relevant ministries such as the religious affairs, interior, and defense.  High level and well-versed religious Sheiks namely; Dr. Sheikh Mohamed Shakul, Dr. Abdinasir Ibrahim Ahmed, and Sheikh Ibrahim Sheikh Mohamed shared their knowledge and experiences as well as form a common understanding on the various aspects of the subject matter.  During the four days training, the following topic and area of focus were thoroughly discussed and debated over:

Over the four days, all participants highlighted and emphasized on the need to fully understand the real and true teachings of Islam to counter those who provide wrong and misinterpretation of the religion and further called for a united front to eliminate those individuals and groups who claim to represent and do harm in the name of Islam and other religions.

The training is believed to enhance the knowledge of the participants, who are representatives of the community, to further be able to use tools to displace Al-Shabaab and other extremist narratives and wrong influences.  The training is the second round aimed to reach more representatives of the various communities who, in turn, will pass the knowledge to their communities at the grassroots level.

The training was concluded on a high note to collectively defeat and counter the narratives of extremists groups.  Participants were awarded certificates for their successfully participation.