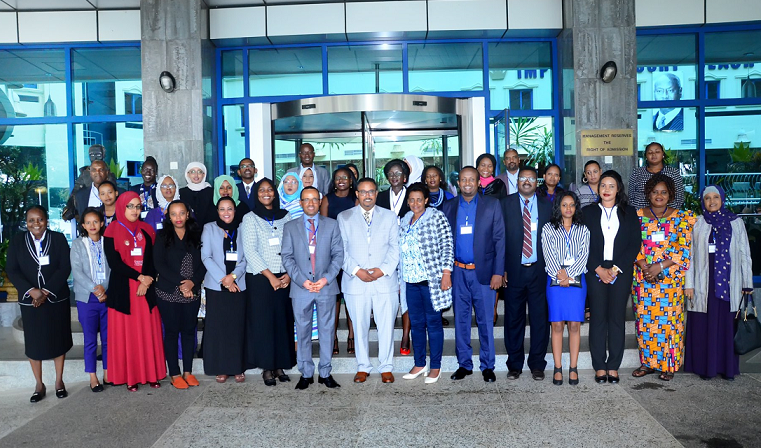 Regional Training on the Role of Women in Countering Terrorism Concluded

25 April 2019, Entebbe, Uganda:  IGAD Security Sector Program (IGAD SSP), with support from the European Union Trust Fund (EUTF) through the Austrian Development Agency (ADA) under the IPPSHAR program, concluded the three days training program on the roles of women in counter terrorism for all IGAD Member States, held from 22-24 April 2019 in Entebbe, Uganda.

It is evident that women and girls constitute nearly half of the population of the IGAD region. Despite the demographic significance, their inclusion in the processes of counter radicalization and counterterrorism has been limited. On the other hand, women and girls are the main victims of violent conflicts, and are disproportionately affected by acts of terrorism.  Studies show that women could play a crucial role in spotting radicalization in its early stages, and preventing terrorism through delegitimizing extremism narratives. They could also assist security actors to make counter terrorism program design and implementation more effective. This is not to ignore, however, that they can also be mobilizers and recruiters to terrorist groups, play support roles and perpetuate terrorist acts.

It is within this context that this training workshop was organized. The purpose of the training was to bring a wider and deeper understanding of gender perspectives in terrorism and inform participants on the basic concepts, good practices, opportunities/challenges, international legal instruments that require/encourage women inclusivity in counter terrorism. It was, in the end, intended to support Member States in developing mechanisms where in women could play their share in the fight against terrorism.

38 representatives from all IGAD Member States, out of which 35 were women, participated in the training.  The participants were drawn from relevant institutions such as the Police, Judiciary, Parliament, Ministry of Foreign Affairs, CSOs, Ministry of Interior, National Counter Terrorism Centers, and Ministry of women and human rights.

Regional experts who have extensive work experience shared their experiences and facilitated the training through interactive discussions, case studies, and group work to achieve the intended objective.  For instance, Ms. Fauziya Abdi Ali, founder and president of Women in International Security (WIIS) of (HoA), and Martine Zeuthen, a Senior Research Fellow at RUSI, based in Nairobi, shared their expertise and filed experience focusing on roles of women in terrorism in our region and beyond, among others. IGAD Gender Offices have also made valuable contributions on this training.

During the three-days training, the following topics were covered, that was believed to have contributed to enhancing the knowledge of the participants.

Participants appreciated the content and methodology of the training by emphasizing on the knowledge they have acquired as well as the networking opportunities they have established that is believed to enhance their capacity in handling their respective areas of work.  They have further expressed the importance of women’s inclusivity in any counter terrorism approaches as women are found to be key players as both being a victim and a perpetrator that necessities making them part of the solution.