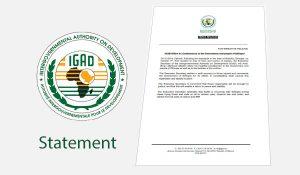 Following reports of the Joint Monitoring and Evaluation Commission (JMEC) Chairperson on the unfolding situation in South Sudan, the latest effort to convene the National Dialogue, and consultations with the IGAD Member States, the Chairperson of the IGAD Assembly of Heads of State and Government, H.E. Prime Minister Hailemariam Dessalegn, has called for an Extra-Ordinary Summit of the IGAD Assembly to be held on 12th June 2017 in Addis Ababa.

The Summit is expected to deliberate on the dire security and humanitarian situation facing South Sudan. The deteriorating security situation has resulted in sharp increase of internally displaced persons (IDPs) and refugees, requiring IGAD Leaders to speak with one voice to abate the crisis.

IGAD’s consultations with the African Union and the United Nations also highlight that the region has to lead the way for a concerted effort to bring forward the dialogue to solve the problem in South Sudan.

It is sad to note that the situation is expected to become worse with the onset of the rainy season in the country. The neighboring countries of South Sudan and the international community are making every effort to ameliorate the catastrophic situation. However, the continued armed conflict and the difficulties being faced in transporting the humanitarian supplies to the needy population are matters that IGAD Member States view with extreme concern.

IGAD Member States have, since the eruption of the conflict in December 2013, been seized unilaterally and collectively with the problem of South Sudan. They believe that the Agreement on the Resolution of the Conflict in the Republic of South Sudan (ARCSS) signed between the Government and the Opposition in 2015 charts the way forward to bring enduring peace, stability and a democratic order in the country. IGAD Heads of State and Government have convened several Summit meetings and given their support and encouragement to the Transitional Government of National Unity (TGoNU) to fully implement the Peace Agreement that they have signed.

The IGAD Member States have repeatedly urged the Parties to the conflict to work closely with JMEC in the implementation of the ARCSS.  They have called upon the Parties to renounce violence and find peaceful solutions to their differences through dialogue. They have conveyed their collective and united messages to the Parties through their Summit meetings as well as their bilateral engagements with the Government and the Opposition. They hope that the Parties will adhere to implement the ARCSS and find amicable solutions. It is with this understanding that the upcoming IGAD Summit will be held.