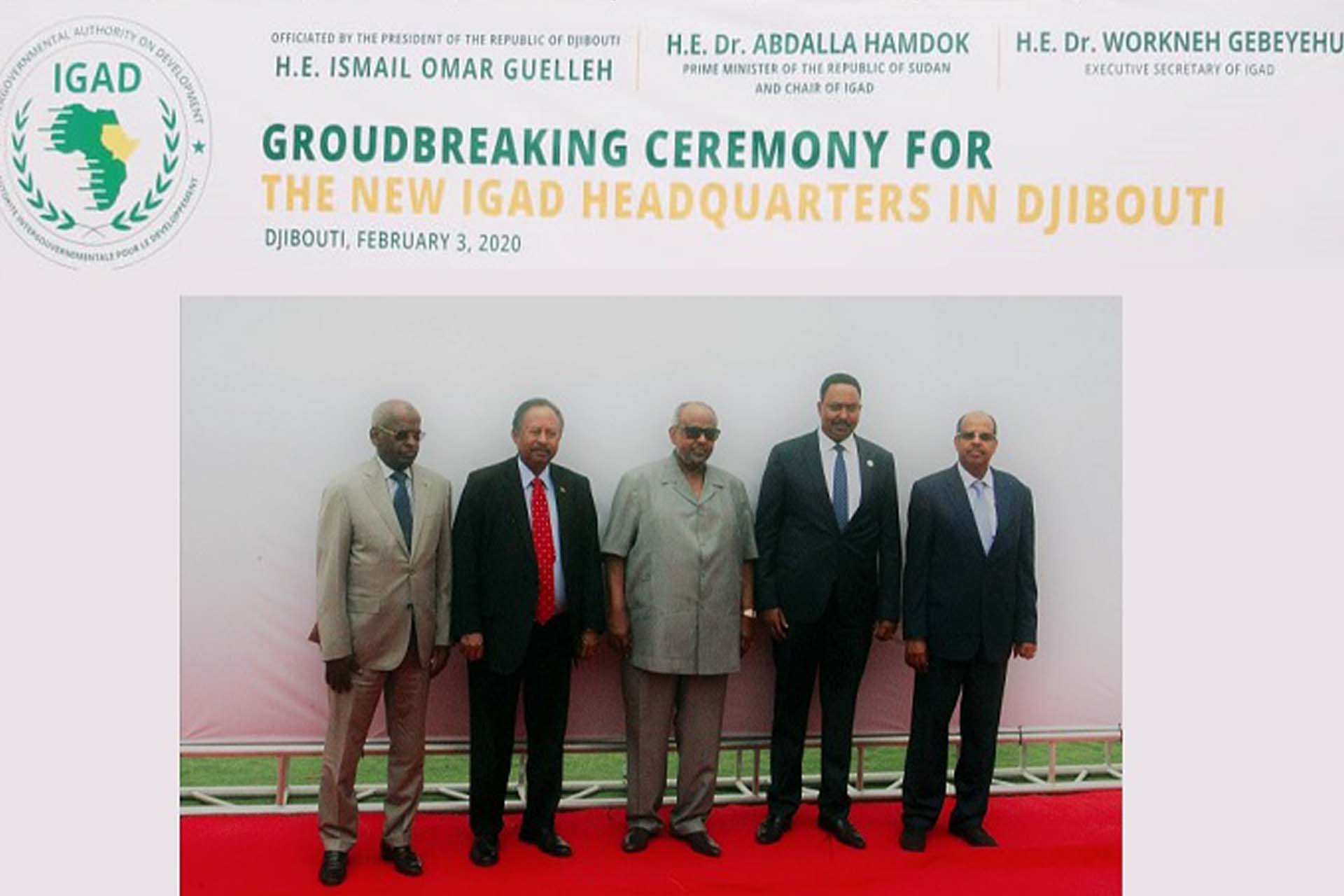 Feb. 3. 2020, (DJIBOUTI, Djibouti): The President of the Republic of Djibouti, H.E. Ismail Omar Guelleh, and the Prime Minister of the Republic of Sudan and Chairperson of the Intergovernmental Authority on Development (IGAD), H.E. Dr. Abdalla Hamdock, today presided over the ground-breaking ceremony pour the new IGAD headquarters in Djibouti.

President Guelleh described the event as a major milestone bringing about a new era for the regional organisation that was founded on ideals grounded on cooperation, development and harmony between Member States. President Guelleh welcomed PM Hamdok and congratulated IGAD Executive Secretary, Dr Workneh Gebeyehu, for his dynamism and experience in diplomacy and wished well in his endeavour so as to lead the regional organisation into a new era.

Dr Hamdock who is also the Prime Minister of the Republic of Sudan described the ceremony as much more than just breaking of ground or laying of a foundation stone, but an important rite of passage in the history of IGAD.

The decision to build and move into one’s own house is always a momentous milestone amongst the communities of the IGAD region and indeed around the world,” stated Dr Hamdock, adding that it is a universally recognised mark of independence and maturity.

During the colourful brief ceremony, the architectural designs and drawings of the new complex were unveiled.

The prime location plot of land the complex will be constructed on measures about 10,000 square metres was generously donated by the government and people of Djibouti in 1998.

The IGAD Chairperson called on all the other Member States, development partners and well-wishers to “dig deep and in a very tangible way, emulate the generosity of Djibouti in supporting the vision of IGAD by contributing generously towards the construction of the new headquarters.”

Speaking at the same occasion, the IGAD Executive Secretary, Dr. Workneh Gebeyehu pointed out that the new headquarters is one of the cornerstones in the vision that the Member States and himself share for the regional organisation. 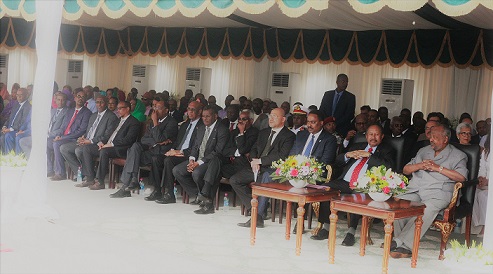 The new headquarters is a tangible brick-and-mortar symbol of our efforts towards regional integration in the greater Horn of Africa,” said Dr. Workneh labelling it as a symbol of the new strategic direction that IGAD is taking towards becoming a more integrated organisation. “It will be emblematic of our desire to achieve peace and prosperity in this region.”

He added that the complex will set a firm foundation, provide safe sanctuary and act as a citadel of inspiration for IGAD to pursue its mission to support Member States in promoting and maintaining peace and security, as well as fostering economic cooperation and regional integration.

The Executive Secretary paid a special tribute to his predecessors that include Amb. (Eng.) Mahboub Maalim and Dr Tekeste Ghebray who were present. He also remembered the late Dr Mekonnen Kibret and the late Dr Attala Hamad Bashir who have since passed on.