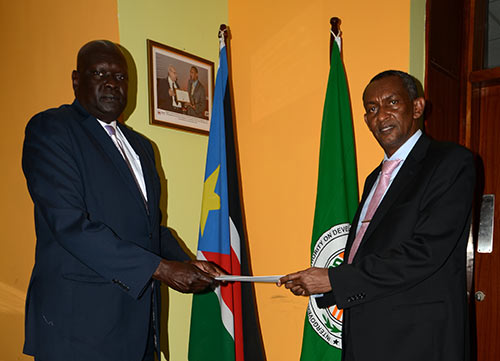 In Nairobi today Monday 9th February 2015, the IGAD Executive Secretary, Amb (Eng.) Mahboub Maalim received the accreditation papers of Ambassador Akuei Bona Malwal as the Permanent Representative of the Republic of South Sudan to IGAD. Following his appointment by H.E. Dr Barnaba Marial Benjamin, Minister for Foreign Affairs and International Cooperation of the Republic of South Sudan, Amb Malwal will also represent his country as an ambassador to Ethiopia and Djibouti, as well as being the permanent representative to the AUC and UNECA based in Addis Ababa.

Amb Mahboub expressed his gratitude and appreciation to the Government and the People of South Sudan for honoring IGAD with the accreditation that will go a long way to strengthen the membership of the new nation in the region, build its capacity and ensure the visibility of IGAD.

The Executive Secretary further commended the signing of the peace deal in Addis Ababa on 31st January 2015 and called upon the parties to implement the agreement for the sake of the people of South Sudan and the region.

On his part, Amb Malwal recognized IGAD’s importance to South Sudan as the organization that midwifed the Comprehensive Peace Agreement in Nairobi in 2005 leading to their independence.

The newly appointed envoy also applauded IGAD for continuing to mediate the peace process for South Sudan in Addis Ababa. He reiterated the commitment of his government to the process expected to materialize into a final peace agreement in the next two months.