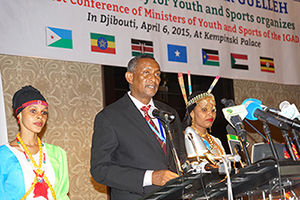 Djibouti, 06-04-2015: The Ministers in charge of Youth and Sports Affairs from the Intergovernmental Authority on Development (IGAD) members states this morning endorsed the IGAD Games Charter following an official opening ceremony of the First IGAD Ministerial Meeting on Youth and Sports led by Djibouti Prime Minister, HEM Abdoulkader Kamil, at Djibouti Kempinski Palace.

“Youth is a very fertile ground on which we can plant positive seeds as much as it can bear negative seeds. Our region is in dire need of positive-minded youth”, he said before concluding that he would like to see the First IGAD Games become a reality soon.

HEM Badoul Hassan first called on the audience to observe a minute of silence in honor of the victims of the recent terror attack in Garissa, Kenya. He then reminded them that the meeting coincided with the International Day dedicated to Sports in the Service of Peace and Development.

“IGAD Games are the golden occasion for the promotion and the valorisation of upcoming young sports people through identification programmes of young talents”, he said. Sports encompass values that will help fight “obscurantism, violence, intolerance, and terrorism”, he concluded before giving the floor to the Djibouti Prime Minister who declared the First IGAD Ministerial Meeting on Youth and Sports officially open.

And it was during a short closed doors session that the IGAD member states concerned ministries fine-tuned and endorsed the IGAD Games Charter that had been prepared by an IGAD Committee of Experts the previous day for the purpose.