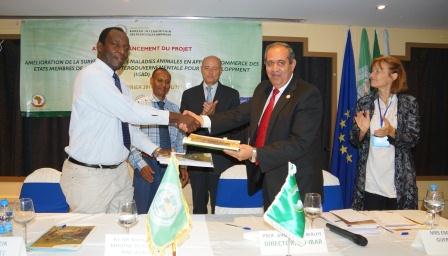 Djibouti, 18-02-2014 – The Acting Executive Secretary of the Intergovernmental Authority on Development (IGAD), Mr Yufnalis OKUBO, and Dr Ahmed Elsawalhy, Director of the Inter-African Bureau for Animal Resources of the African Union (AU-IBAR), tomorrow will sign a partnership agreement for the improvement of the surveillance of animal diseases in support of trade in IGAD Member States, in the presence of the Director of Livestock and veterinary Services of Djibouti (Mr Moussa Ibrahim Sheikh) sitting for H.E. the Minister of Agriculture, Livestock and Fisheries of the Republic of Djibouti, Mr Mohamed Ahmed Awaleh, HE the Head of the E.U. Delegation to Djibouti, Mr Joseph Silva, and the Representative of FAO to Djibouti, Ms Emmanuelle Guerne Bleich.

This partnership comes within the framework of the Regional Indicative Programme of the 10th European Funds for Development (10th EDF) and of the initiative Supporting the Horn of Africa’s Resilience (SHARE), and has been endowed with 6 million Euros from the European Union. This partnership will consist in implementation of animal disease surveillance program over 32 months by the Inter-African Bureau for Animal Resources of the African Union (AU-IBAR) in partnership with IGAD Centre for Pastoral and Livestock Development (ICPALD) under the overall supervision of the IGAD Secretariat.

In his opening remarks, Dr Ahmed Elsawalhy welcomed the audience and highlighted that this was “the first project that AU-IBAR has jointly developed with a Regional Economic Community and successfully secured funding”.

Mr Joseph Silva noted that “through a wide range of activities, such as this very workshop, the first goal is that mechanisms for animal identification and traceability are strengthened and health certification systems reinforced”.

In his turn, Mr Yufnalis OKUBO reaffirmed IGAD’s “commitment to complement the efforts of member states in disease control, improving compliance to market requirements and enhancement of livestock and meat trade in collaboration with AUIBAR, FAO, ILRI, private sector and other partners involved in the area”.

Indeed, the livestock sector has substantial potential to contribute to food security and general economic integration within the Greater Horn of Africa. However the sector is seriously constrained by animal diseases. The bans the IGAD region had by the major importing countries on livestock imports due to concerns over trans-boundary animal diseases  have had significant impacts on the livelihoods of livestock dependent communities and business enterprises.

The animal disease surveillance program will contribute to strategic programs, particularly in terms of harmonization of sanitary measures and support to:

•    the development of traceability and certification schemes,