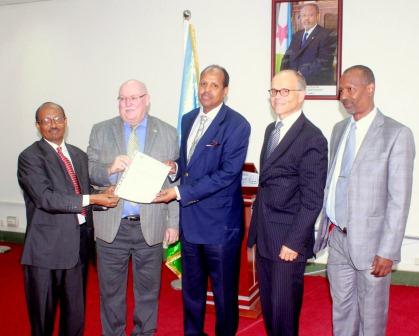 Mr. Wolfgang Piecha, Ambassador of the Federal Republic of Germany along with Mr. Mohamed Moussa, Director IGAD Agriculture and Environment Division, handed over a financial support agreement document to Mr. Mahmoud Ali Youssouf, Djibouti Minister of Foreign Affairs and International Cooperation in the presence of Dr. Ralf Matthias Mohs representing the German Ministry for Economic Cooperation and Development (BMZ) on February 11th, 2014 at the Djibouti Ministry of Foreign Affairs.

This financial support agreement amounting to an envelope worth € 4million, finalized and signed by the Minister of Economic Cooperation and Development of Germany and the Executive Secretary of IGAD, Ambassador (Eng.) Mahboub Maalim, earlier this year, consists in providing additional means to assist mostly the rural populations of Dikhil District in the Republic of Djibouti in their fight against drought situations.

This recent German assistance is part of its broader activities in the Horn of Africa contributing to the implementation of the IGAD Drought Disaster Resilience and Sustainability Initiative (IDDRSI) signed by IGAD member states in 2012.

“This project is part of the fight against hunger, drought. It consists in digging wells in rural areas and thus help people in rural and arid areas and provide them with the necessary means to meet their needs,” Ambassador Wolfgang Piecha said.

The IGAD representative, Mr. Mohamed Moussa, the Director of Agriculture and Environment of IGAD, in his own name and on behalf of the Executive Secretary of IGAD expressed his heartfelt gratitude to Ambassador Wolfgang Piecha and the delegation he led for this funding “which will help, in my opinion, to protect vulnerable populations and thus fight against drought”.

The Minister of Foreign Affairs and International Cooperation thanked Ambassador Wolfgang Piecha and his delegation for their contribution to this project funded by the German Bank and he said that “this is part of strengthening bilateral relations between the two nations”.

IDDRSI is a 15 year strategy promoting a multi-sectoral and holistic approach. It is a proactive way towards responding to drought by tackling its structural causes rather than by relying on humanitarian aid when drought situations arise.