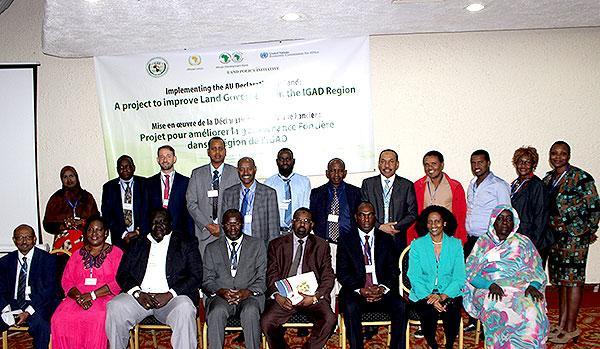 Land Governance in the IGAD Region on the Right Track

Home » Land Governance in the IGAD Region on the Right Track

This one-day Steering Committee Meeting was preceded by a Progress Review and Planning session held on the same venue, with the same participants, and both meetings under the leadership of the Director of Agriculture and Environment Division-IGAD, Mr. Mohamed Moussa, assisted by the Land Tenure Expert of IGAD LPI, Ms Esther Obaikol.

Following the Progress Review and Planning session during which the project implementation status was gauged and a work plan 2017-2018 was developed, the members of the IGAD LPI Steering Committee Meeting identified areas of improvement such as a weak communication pattern with IGAD member States.

A work plan 2017 was agreed upon around five priority areas: an IGAD regional dialogue platform to be established, gender mainstreaming within the IGAD LPI project, a mid-term review to be carried out, resource mobilization, and a monitoring and evaluation mechanism to be put in place.

During this 2nd Steering Committee meeting, progress made in implementing the decisions of the previous Steering Committee Meeting held in February was scrutinized. Also, the 2016 Annual Narrative Report and the 2016 Annual Financial Report were presented before the budget estimate reports for 2017 were adopted following discussions as to prioritization of the activities.

Towards the end of the meeting and after adoption of the IGAD LPI Work Plan 2017, Director Mohamed Moussa congratulated the IGAD LPI team for the work done so far and thanked IGAD Member States for their contribution to the meeting that achieved its objectives. He also addressed his appreciation to the Swiss Development Cooperation agency for the support provided.