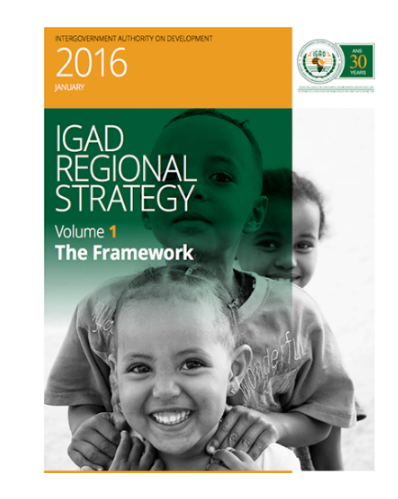 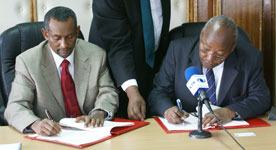 Today the Acting Minister for Finance of the Republic of Kenya, Hon John Michuki signed a financing agreement with the IGAD Secretariat for the implementation of a regional HIV and AIDS project in the country.

The project to be undertaken in five of the seven IGAD member states who have signed similar agreements and memoranda of understanding is part of the 15 million-US Dollar IGAD Regional HIV and AIDS Partnership Program (IRAPP). The four-year program supported by the Africa Catalytic Growth Fund through the World Bank has also received pledges for additional financial support from the African Development Bank (AfDB), the Canadian International Development Agency (CIDA) and the Norwegian Agency for Development (NORAD).

After signing the agreement, Hon Michuki who is also the Minister for Environment and Mineral Resources said that the resources will complement the contribution made by the Government of Kenya and other bilateral donors in fight against the pandemic.

He thanked IGAD for mobilizing these additional resources to benefit the member states in support of IRAPP. The Minister also expressed his gratitude to the World Bank who is the administrator of the ACGF from where the funds were sourced to finance the regional initiative.

“This will no doubt foster general cooperation in our fight against HIV and AIDS in the Horn of Africa region,” he pointed out adding that the resources available in form of grants will be shared among the signed up IGAD member states.

Speaking at the brief ceremony that took place at the Treasury Building in Nairobi, Eng Mahboub Maalim, IGAD Executive Secretary said that while mobilizing for more resources, the funds available will be utilized in the provision of HIV and AIDS prevention, treatment and care, support and mitigation services to internally displaced persons, refugees and returnees, and cross border collaboration on health sector response to HIV and AIDS.

The Executive Secretary stated that besides working through the national AIDS authorities in the member states, UNHCR, IOM, WHO and UNAIDS were providing technical assistance in the implementation of the Program.

“I assure you that there will be more money and technical support not only in HIV and AIDS, but all other priority areas of IGAD including infrastructure development for regional integration,” he promised.

Also present at the signing was Mr Michael Mills, the Lead Economist with the World Bank Country Office in Nairobi.

Pictures from the event