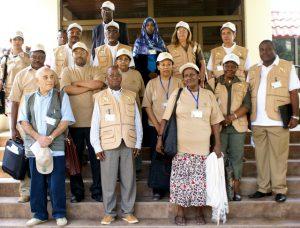 The International Election Observer Mission was led respectively, for the African Union, by H.E Mr. Jacques Baudin, a former Foreign Minister of Senegal, for the League of Arab States, by H.E. Ambassador Mahmoud El-Souri, Head  of the Division of the Horn of Africa, for the Organization of Islamic Conference, by Ambassador Habib Kaabachi, Director, Political Department, for the Intergovernmental Authority on Development, by Honourable Netsannet Asfaw, Director of the Division Peace and Security and  for the  Organization of the French Speaking World (Francophonie), by Mr. Saidou Kane, Head of Mission.

The International mission of about forty members, was composed of Ambassadors of Pan-African Parliamentarians, heads of electoral institutions, officials of the League of Arab States, Organization of Islamic Conference and the Intergovernmental Authority on Development and members of civil society

The International Mission arrived in Djibouti staring from April 1, 2011 with a mandate to observe the presidential election on April 8, 2011. The observation focused on the regularity, transparency, fairness and proper conduct of elections in accordance with relevant provisions: for the African Union: the OAU Declaration on Principles Governing Democratic Elections in Africa AHG / Decl. 1 (XXXVIII), the AU guidelines for observation and monitoring of elections; for the League of Arab States: the Resolution of the Ministerial Council of the League of Arab States concerning the observation of elections; for the Organization of the Islamic Conference: the 10 year Action Plan  adopted by the Extraordinary Summit of Makkah in December 2005 and the Charter of the Organization of Islamic Conference adopted by the eleventh Islamic Summit in Dakar in 2008; for the Intergovernmental Authority on Development: The agreement establishing IGAD; for the International Organization of the French Speaking world: the Bamako Declaration as well as  the Constitution and the laws of Djibouti.

The sending of this mission is part of the commitment by the institutions concerned to support the democratic process in Djibouti.

The mission was deployed in Arta, Ali Sabieh, Dikhil, Obock Tadjorah and Djibouti to monitor the elections.

Following its observation, the Observer Mission presented the following findings:

In view of the foregoing, the international mission found that the election of 8 April 2011 was peaceful, calm, fair, transparent and took place in dignity. It declares that the election was free and democratic.

The International Observer Mission congratulates the people of Djibouti for its maturity and commitment to democracy.

The mission urges Djibouti political actors to exert more effort with a view to consolidating democracy and emphasizing consultation.

The Mission calls on the two (2) candidates for election of April 8 to 2011, to have recourse in cases of dispute, to the legal channels provided for this purpose.

It reaffirms the readiness of member institutions of the Mission to support the people of Djibouti in their legitimate aspirations to democracy and progress.

It expresses its deep appreciation to the authorities and to the people of Djibouti for the hospitality it received and the cooperation which was always demonstrated.