Joint statement by envoys of the UN, the EU, IGAD and its current Chair International partners welcome agreement between the Federal Government and Puntland

Home » Joint statement by envoys of the UN, the EU, IGAD and its current Chair International partners welcome agreement between the Federal Government and Puntland 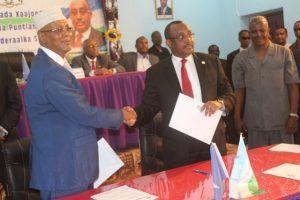 Garowe, 14 October 2014 – The United Nations, the Inter-Governmental Authority on Development (IGAD) and Ethiopia in its capacity as its Chair, and the European Union (EU) welcomed the agreement signed today between the Federal Government of Somalia and Puntland State of Somalia to resume relations and work together on peace and state-building priorities.

“We welcome the agreement reached today between the Federal Government of Somalia and Puntland State of Somalia. This agreement is an important step forward in the path towards peace- and state-building for all Somalis. Puntland with its 16 years of experience in state building and governance has much to contribute to building a strong, peaceful, federal, democratic and united Somalia. Many crucial steps must be jointly taken in the coming months, including reviewing and implementing a Federal constitution and holding elections in 2016. We stand ready to support the implementation of this agreement, including through