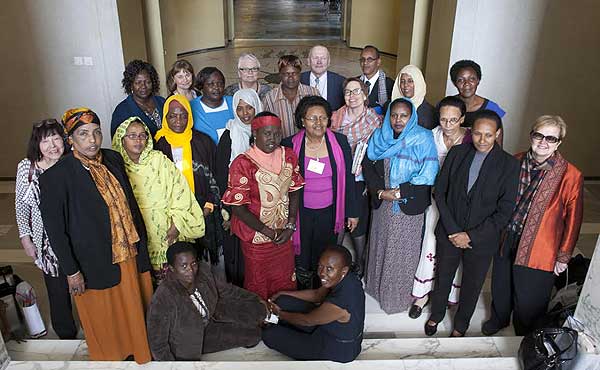 An IGAD Women Parliamentary delegation which traveled for a study tour in the Republic of Finland from 11th to 18th May 2014 returned home after accomplishing its mission successfully. The delegation comprised of 18 representatives from National Parliaments of IGAD Member States namely: Djibouti, Ethiopia, Kenya, Somalia, South Sudan, Sudan, Uganda as well as the Government of Somaliland.

The main objectives of the study tour were to share ideas and exchange experiences on the achievements and challenges of women Members of Parliament in Finland and IGAD Member States; to learn good practices from the Finnish Women’s attainment of higher representation in Parliament and other organs of government; and to establish networks among women Parliamentarians in Finland and countries in the Horn of Africa.

During the week-long tour in Finland, the IGAD Women Parliamentarians visited a Finnish Women’s Organization, Marttaliito, the European Parliament Liaison Office in Helsinki as well as a multi-sector consulting firm NIRAS and received briefings on the activities carried out by these institutions. The delegation also attended a one day High-Level Seminar on African Experiences in Peace Building and State Building, organized by the Ministry for Foreign Affairs (MFA) of Finland in which the IGAD Executive Secretary and two Women Parliamentary delegates were among the panelists.

The Women Parliamentarians from the IGAD Region have received an intensive training at the Finnish Parliament for two days during which they attended a question time at a Parliamentary plenary session. The IGAD Parliamentarians were also met and briefed by the Minister for Foreign Affairs, H.E. Mr. Erkki Tuomioja and Minister for International Development Cooperation, H.E. Mr. Pekka Haavisto. The delegates had a study visit to the countryside where they saw for themselves how the municipal democracies function. The Parliamentarians likewise visited MTT Agrifood  Research Finland and received briefings on how the institution operates.

The study tour, the first of its kind in the IGAD Region was sponsored by the MFA of Finland.  It is known that the Finnish Parliament is the first in the world to introduce Gender Equality as far back in 1906. Men and women were granted equal rights not only to vote but also to stand for elections. To date, Finland stands 8th in the world in representation of Women in Parliament, which is 43 per cent of the total.

On the other hand, studies conducted in the IGAD Region show that representation of women in the National Parliaments ranges between 13 and 35 percent. The lessons learnt and the networks created would be therefore of benefit to the IGAD Women Parliamentarians in their efforts to enhance their representation in the legislative bodies as well as other organs of Government.