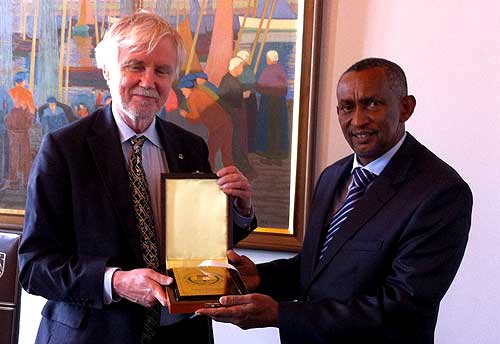 IGAD Executive Secretary Amb (Eng.) Mahboub Maalim concluded a week-long official mission to Helsinki where he held consultations with Finland’s Minister of Foreign Affairs H.E. Erkki Tuomioja on current security and development related concerns in the IGAD region and on strengthening the partnership between IGAD and the Government of Finland.

Amb. Maalim’s official mission from 11-18 May also involved a visit to the Headquarters of Crisis Management Initiative (CMI) in Helsinki, which is a globally recognized organisation founded by President Martti Ahtisaari in 2000. The organisation works to promote peace and resolve conflicts in many parts of the world. During the meeting, Amb. Maalim and CMI Executive Director Ms. Tuija Talvitie signed a cooperation agreement.

Amb. Maalim’s other engagements in Helsinki included addressing a high-level seminar on “Peace building to State building: African Experiences” organised by Finland’s Ministry of Foreign Affairs on 13 May 2014. The aim of the seminar was to explore African experiences in peace building and State building processes and learn from past successes and challenges.

Amb. Maalim also conducted visits to various Helsinki-based institutions including the Finnish Defense Forces International Center (FINCENT) which is a world-renowned training center on crisis management as well as NIRAS, a multi-sectoral consulting firm whose work spans about 70 countries globally. Amb. Maalim received briefings on the work of these organisations and held discussions with officials on possibilities of cooperation with IGAD. In addition, Amb. Maalim and his delegation met with Captain Joakim Hakans, Honorary Consul-general of the Republic of Djibouti in Finland, who hosted a visit to the historic Turku Archipelago.

The visit of the Executive Secretary coincided with a study tour of women members of parliament from the IGAD Member States to Helsinki. The delegation of women members of parliament that were drawn from Djibouti, Ethiopia, Kenya, Somalia, Sudan, South Sudan, Uganda and Somaliland were led by H.E Hasna Barkat Daoud, Minister of the Promotion of Women, Family Welfare and Social Affairs of the Republic of Djibouti