Home » IGAD to Adopt a Treaty and Organizational Structure Soon 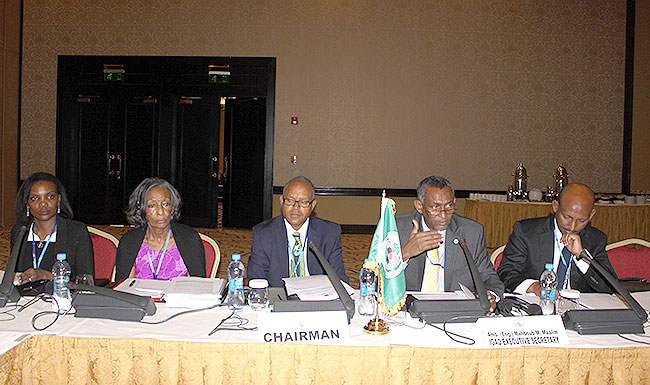 17-11-2016, Djibouti: During a three-day technical meeting on November 14th, 15th, and 16th in Djibouti, the Intergovernmental Authority on Development (IGAD) Secretariat successfully submitted a draft Treaty, a draft Organizational Structure, and a draft budget 2017 to its Member States Ministries of Foreign Affairs and Ministries of Finance for review in view of forwarding them to the next IGAD Council of Ministers for endorsement.

The technical meeting on the draft IGAD Treaty took place on day one of this series of key meetings since the Treaty is the overarching document which will reflect on the IGAD Organizational Structure.

The Executive Secretary of IGAD, HE Amb. (Eng.) Mahboub Maalim, in his opening remarks highlighted that the IGAD Treaty and the IGAD Organization Structure have been in the making during the last eight years.

“Today, we are here to seek inputs from our Member States in the exercise that consists in ironing out a few details of our draft Treaty with the help of legal experts”, he said.

“This draft document has been inspired by our sister organizations’ treaties and has been very well scrutinized in such a way that the only Regional Economic Community on this continent that does not have a Treaty yet, is endowed with a strong one”, were some his words.

Nevertheless, the Executive Secretary reminded the audience that IGAD was the leading REC on the African continent in terms of the number of running programmes.

“This meeting of today on the draft Treaty is a climax where a general consensus will be reached hopefully”, he concluded; which consensus was then reached before closing of the meeting.

In his closing remarks during the meeting on the IGAD Draft Treaty, Ato Berhane Fisseha Woldeselasssie, the Focal Point of IGAD at the Ministry of Foreign Affairs of Ethiopia, thanked and praised the Executive Secretary for all the efforts towards “a major and tremendous achievement that will naturally trickle down to the Organizational Structure and positively impact the programmimg aspect of the organization”.

On November 15th, the same participants convened to discuss proposed organizational structures submitted by the Human Resources Section of the GAD Secretariat. Once more a consensus was reached by Member States around an extended Organizational Structure where Deputies Executive Secretaries in charge of Programming and Corporate Services respectively will be aiding the Executive Secretary in discharging his mandate in an ever rowing organization.

The last day of this series of meetings saw the adoption of the IGAD Budget 2017 to be submitted to the next Council of Ministers.###