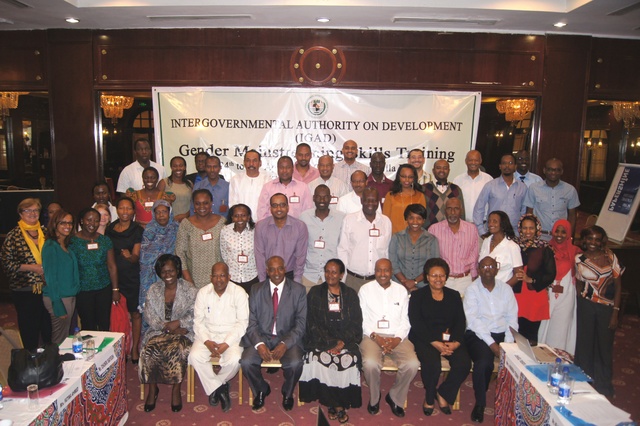 Khartoum, Sudan: Starting yesterday, Wednesday 24th April 2013, about fifty core staff of IGAD Secretariat and Specialized offices convened in Khartoum for a four-day skills training workshop on gender mainstreaming.
In his opening statement, the IGAD Executive Secretary, Amb. (Eng.) Mahboub Maalim said that the training workshop was timely and crucial in light of the recent developments at the Secretariat. He gave the examples of the mapping out of the 2011-2015 IGAD Strategy, the designing of the 2012-2020 Regional Gender Policy Framework and the launching of the IGAD Drought Disaster Resilience and Sustainability Initiative that will run up to 2027.

Reading the statement on behalf of the Executive Secretary, the Director of Agriculture and Environment at the Secretariat, Mr. Mohamed Moussa pointed out that these undertakings are either increasing or reinforcing sectoral programs/projects that need to be given due emphasis for their realization.

“Half of the population in our region are women and many studies have shown that majority of them lack equal access to resources and services,” he stated,  that the situation has been and is still more complicated due to prevalence of intra and interstate conflicts as well as recurrence of natural calamities, such as drought and floods. Despite all these challenges, the IGAD Executive Secretary acknowledged that women in the region were playing a great role in socio-economic development of their respective communities and countries.

He also pointed out that many development policies and initiatives have failed to realize their objectives because of excluding women’s participation and representation in the processes. Amb. Mahboub reiterated the importance of mainstreaming gender issues into IGAD’s priority sectoral programs/projects in order to attain meaningful and sustainable socio-economic development as well as peace and security in the region.

Outlining the objectives of the training workshop, the Gender Program Officer at the Secretariat, Ms. Hadera Tesfay stated that the participants who included directors and program managers would be enabled to understand and internalize basic concepts of gender and development issues. She expressed confidence that the trainees who are drawn from the IGAD Secretariat and Specialized Institutions would be empowered to incorporate gender issues in their respective projects and programs. The training workshop concludes on Saturday 27th April 2013.