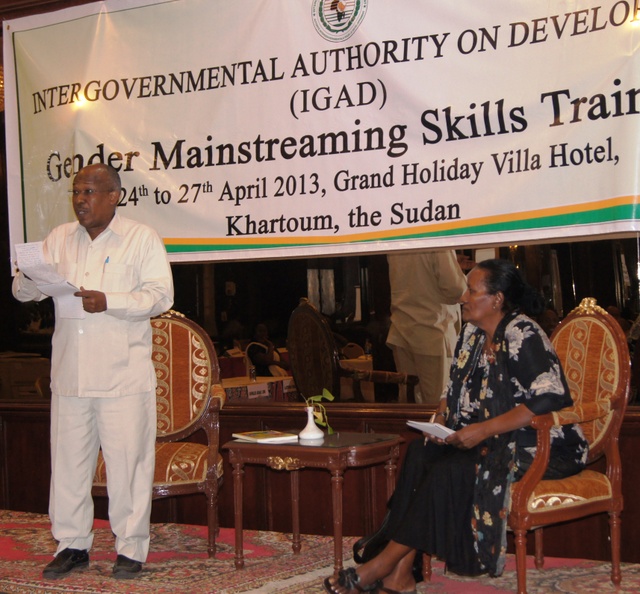 Khartoum, Sudan: After four days of extensive training, IGAD staff drawn from the Secretariat and Specialized offices returned to their respective stations equip with knowledge and skills on gender mainstreaming.

Closing the workshop, the Director of Peace and Security at the IGAD Secretariat, Hon. Netsannet Asfaw stated that more than half of the region’s population is women and therefore it is only prudent that the region properly utilizes this very important resource. She added that the countries of the region stand to benefit and develop more if both men and women worked together.

“Africa is the fastest growing continent in the world,” she pointed out, emphasizing the need to empower women to ensure the growth is widespread and sustainable. The Director called upon both men and women in the region to seize social and economic opportunities that are increasingly becoming available.

In an exclusive interview, Hon. Netsannet praised the recent nomination of six women cabinet secretaries in the Government of Kenya. She described the move as a positive gesture in the promotion of gender equality. Furthermore, the Director noted with gratitude that among the women nominees were to fill the crucial foreign affairs, defence as well as land, housing and urban development dockets.

She called on other countries of the region to emulate this example and go even farther in other sectors of development.

Moving a vote of thanks, the Director of Economic Cooperation and Social Development at the Secretariat, Mr. Elsadig Abdalla expressed his gratitude to all staff who made it to the training, the very able training facilitators and the generous financiers, Phase II of JFA/ISAP. He further paid tribute to Ms. Hadera Tesfay for her passion and enthusiasm to ensure all cadres of staff attended the workshop. ENDS.