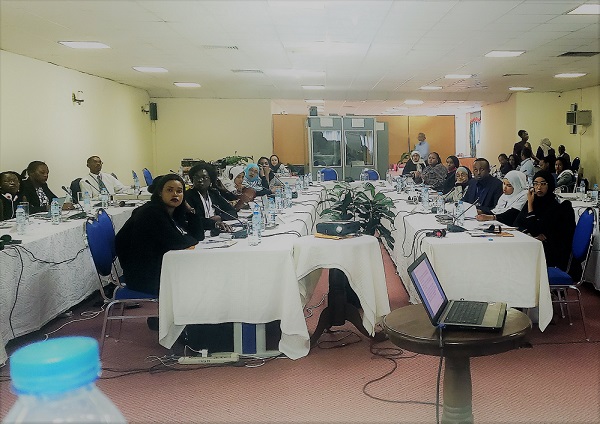 22 April 2019, Entebbe, Uganda:  IGAD Security Sector Program (IGAD SSP), with support from the European Union Trust Fund (EUTF) through the Austrian Development Agency (ADA) under the IPPSHAR program, kicked off a three days training program on the role of women in counter terrorism for all IGAD Member States.

The training is expected to highlight basic concepts on gender dynamics in terrorism; explore and share experiences and roles women play(ed) in the past, ongoing and potential security challenges in their respective communities. It will also share relevant institutional experiences of governments, civil societies, and others in the region within specific countries.  This training is expected to bring a wider and deeper understanding of gender perspectives in terrorism.  It is expected to inform participants on the basic concepts, best practices, opportunities/challenges, legal instruments that require/encourage women inclusivity in counter terrorism. It is, in the end, intended to support Member States in developing mechanisms wherein women could play their share in the fight against this security threat.

The training was officially opened by Commander Abebe Muluneh, Director of IGAD Security Sector Program (IGAD SSP). Commander Abebe welcomed all the participants and expressed his appreciation to the Government of Uganda for hosting.  In his welcoming remark, he highlighted that “terrorist and extremist groups recruit women to act as informants, facilitators, mobilisers and recruiters; play support roles and perpetrate terrorist act by joining voluntarily or forcibly”.  He further stressed that “fighting against terrorism requires a whole-society approach in which women’s participation is meaningfully needed…their participation in the fighting against terrorism are considerably important..it is our obligation to encourage and engage women in a more systematic basis to the nexus between gender and counter terrorism.”

About 40 representatives from all IGAD Member States drawn from different institutions such as the Police, Judiciary, Parliament, Ministry of Foreign Affairs, CSOs, Ministry of Interior, National Counter Terrorism Centers, and Ministry of women and human rights are participating in this training.  Regional experts are expected to share their experiences and facilitate the training through interactive discussions, case studies, and group work exercises to bring about the required result of the training.

The training is part of IGAD SSP’s effort to contribute to the enhancement of the capacity of IGAD Member States’ institutions in their fight against terrorism.