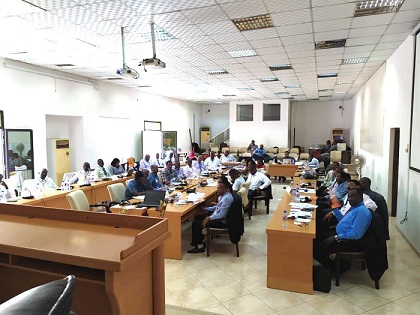 25 July 2019, Djibouti:  IGAD Security Sector Program (IGAD SSP), with support from the European Union Trust Fund (EUTF) through the Austrian Development Agency (ADA) under the IPPSHAR program, conducted a three days regional consultative meeting on the Illicit Circulation of Small Arms and Light Weapons (SALW) with regard to Arms Trade Treaty (ATT) and other relevant International Frameworks, held on 23-25 July 2019 in Djibouti.

The IGAD region has been subjected to various forms of emerging, evolving and existing security threats, which includes illicit circulation of Small Arms and Light Weapons (SALW). Concern for the impacts of illicit small arms flows extends well to most of IGAD Member states’ borders. Despite IGAD’s and its Member states’ (MSs) improving security architecture to address these challenges, cross-border security threats of trafficking in SALW, human beings and drug are further evolving and new risks are also emerging. The illicit circulation of SALW fuels/contributes to armed conflicts, terrorist threats and instability in many IGAD member states, as recognized by the IGAD Peace and Security Strategy (2016-2020) and visibly manifested by recent security development in the region. Therefore, there is a critical need to undertake some consultative technical meetings in addition to regular national assessments in all IGAD Member States to assess any gaps in their national systems and capabilities to prevent the illicit proliferation and use of SALW and ammunition.

Regional and International bodies such as the African Union (AU), and the United Nations (UN) have taken several steps in identifying the threats of SALW.  The AU Master Roadmap of Practical Steps to Silence the Guns in Africa by Year 2020 recognizes that while the causes of conflicts in the continent and the factors driving them have changed, the use of small arms and light weapons has remained a common feature of these conflicts. The AU Roadmap encompasses a number of steps and modalities for action, with a focus on preventing the illicit flow of weapons throughout the continent.  The UN in 2005, ratified the first small arms treaty of global application, the UN Protocol against the Illicit Manufacturing of and Trafficking in Firearms, their Parts and Components and Ammunition (Firearms Protocol) supplementing the United Nations Convention against Transnational Organized Crime. In 2015 UN Member States adopted the Sustainable Development Goals (SDGs), which identify violence and illicit arms flows as obstacles to development. Under SDG Target 16.4, UN member states committed to significantly reduce illicit arms flows by 2030 (UNGA, 2015).

The aim of the meeting was to enable relevant stakeholders to contribute to attain the following objectives (1) evaluate  their current national system and legislations for preventing, detecting and addressing the illicit circulation of SALW, (2) identify effective measures to prevent diversion and improve/strengthen the detection of illicit arms, their seizure and permanent removal from circulation, and (3) review national action/strategic plans in order to prevent, detect, and address the illicit circulation of SALW and suggest areas of improvement and outline regional areas of interventions.

The Opening ceremony was presided by Commander Abebe Muluneh, Director of IGAD Security Sector Program (IGAD SSP).  In his opening remarks, he welcomed all participants and thanked the Government of Djibouti for hosting, and the partners for supporting this important meeting.  He stated that “this meeting is in line with the UN Program of Action on small arms (PoA) and with AU Master Roadmap of Practical Steps to Silence the Guns in Africa” and mentioned that this meeting “is the first of its kind in IGAD; so precisely it is expected to outline standards, roadmaps and applied measures; which could guide a process to build capacity in IGAD MSs to undertake regular national assessments of their practices to prevent, detect, and address the illicit circulation of SALW in the region. Furthermore it would create platform for more consultation and direction with regards to Arms Trade Treaty (ATT) status in IGAD MSs as well”.

Thirty five (35) representatives from all IGAD active Member States’ institutions, namely; Ministry of Foreign Affairs, Ministry of Justice, Ministry Interior Affairs/Interior Security, National SALW Authority/ SALW Focal Points, Police Service, Attorney General Office, and Ministry of Defense, among others, have participated in this training.  Regional technical experts namely Dr. Francis Sang, Dr. Omer A. Azizi and the Regional Centre on Small Arms in the Great Lakes Region, the Horn of Africa and Bordering States (RECSA) have facilitated the training through a co-creation approach. Technical expertise from Small Arms Survey (SAS) was also provided that helped for the regular assessments in the designing and capacity-building phases. The experts delivered presentations on the planned topics complemented by in-class discussions, brainstorming sessions, question and answer sessions and group exercises.

During the three days, the following themes were thoroughly discussed:

At the end of the training, participants came up with a draft outline of roadmap/national action/strategic plans to prevent, detect, and address the illicit circulation of SALW for Member States that will help them to introduce new technical tools in identifying (a) gaps in their national systems and legislations (b) national practices and experiences that could address these gaps, and (c) Consultation and direction with regards to Arms Trade Treaty (ATT).  The key recommendations were:

On 25 July 2019, in cognizant with the existing cooperation that exists between IGAD and RECSA, as this meeting reaffirmed the collaboration, a Memorandum of Understanding was renewed between the Inter-Governmental Authority on Development (IGAD) and the Regional Centre on Small Arms in the Great Lakes Region, Horn of Africa and Bordering States (RECSA) at IGAD Secretariat.  Read the full story of this here.