10 December 2020, Khartoum:  IGAD Security Sector Program (IGAD SSP), with support from the European Union Trust Fund (EUTF) through the Austrian Development Agency (ADA) under the IPPSHAR program, conducted a four-days national consultative meeting, from 7-10 December 2020, on the Illicit Circulation of Small Arms and Light Weapons (SALW) with regard to Arms Trade Treaty (ATT) and other relevant International Frameworks, in Khartoum, Sudan.

The illicit circulation of SALW fuels and contributes to armed conflicts, terrorist threats and political instability in the IGAD region and beyond, as recognized by the IGAD Peace and Security Strategy (2016-2020).  Therefore, IGAD-SSP identified the need to undertake such consultative technical workshops in addition to regular national assessments in all IGAD Member States to assess any gaps in their national systems and capabilities to prevent the illicit proliferation, circulation, and use of SALW and ammunition.

Regional and International bodies such as the African Union (AU), and the United Nations (UN) have taken several steps in identifying the threats of SALW.  The AU Master Roadmap of Practical Steps to Silence the Guns in Africa by Year 2020 recognizes that while the causes of conflicts in the continent and the factors driving them could change, the use of small arms and light weapons has remained a common feature of these conflicts. The AU Roadmap encompasses a number of steps and modalities for action, with a focus on preventing the illicit flow of weapons throughout the continent.  The UN in 2005, ratified the first small arms treaty of global application, the UN Firearms Protocol supplementing the United Nations Convention against Transnational Organized Crime. The Sustainable Development Goals (SDGs), adopted 2015, identifies violence and illicit arms flows as obstacles to development: the SDGTarget 16.4 states that UN member states committed to significantly reduce illicit arms flows by 2030 (UNGA, 2015). 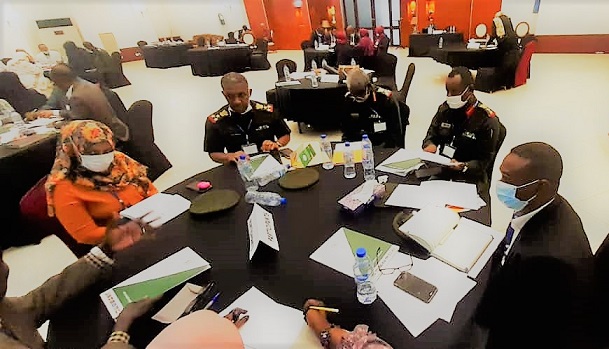 The aim of this national training workshop is to contribute to the enhancement of institutional capabilities of the relevant Sudan Government Units/officials in addressing the illicit circulation of SALW related threats. Specifically, the objectives are: (1) in-depth discussion on regional and international instruments that addressing the SALW related issues (including ATT) and comparing the current status of Sudan national system and legislations that are in place, (2) identify effective measures to strengthen the institutional capacities of the relevant Sudan Governmental units/officials, and (3) review national action/strategic plans (NAPs) in order to prevent, detect, and address the illicit circulation of SALW and suggest areas of improvement and outline possible areas of support.

The opening ceremony was chaired by the Commissioner of Sudan National DDR Commission, Gen. Abdelrahman A.Hameed, and the senior Diplomat Ms. Asrar Ahmed Sidig. In their opening remarks, they thanked IGAD SSP for organizing this important meeting, and noted that the workshop enriches national capacities in Sudan to better predict, prevent and counter the Illicit Circulation of SALW in addition to other transnational security threats (TSTs) and thereby contribute to regional peace and stability, and foster enabling environment for regional integration and development of IGAD region.

On behalf of IGAD Security Sector Program (IGAD SSP), Mr. Khalid Abdelrahman welcomed all participants and thanked the Government of Sudan for hosting, and the partners for supporting this significant meeting.  Mr. Khalid highlighted that “this meeting is in line with the UN Program of Action on small arms (PoA) and with AU Master Roadmap of Practical Steps to Silence the Guns in Africa”; so is expected to outline standards, roadmaps and applied measures; which could guide a process to build capacity of relevant Sudanese institutions to prevent, detect, and address the illicit circulation of SALW. Moreover, it would create platform for more consultation and direction with regards to Arms Trade Treaty (ATT) status in Sudan as well”. 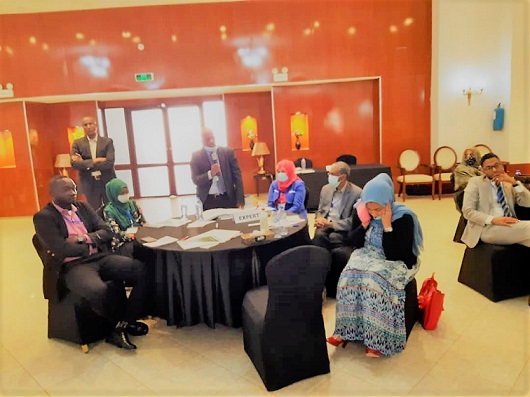 Technical experts from United Nations Institute for Disarmament Research (UNIDIR) in addition to three regional experts from the Regional Centre on Small Arms in the Great Lakes Region, the Horn of Africa and Bordering States (RECSA), SARCOM and Small Arms Survey (SAS), as strategic partners of IGAD SSP, delivered presentations and shared their expertise and consultation was complemented by group discussions.

During the four days, the themes thoroughly discussed includes the following:

Finally, after in-depth sharing of international, regional and national experiences on tackling illicit SALW circulation, participants identified and agreed on effective measures to strengthen the institutional capacities of the relevant Sudan Governmental units; and drafted an outline of national action plan to prevent, detect, and address the illicit circulation of SALW in Sudan.