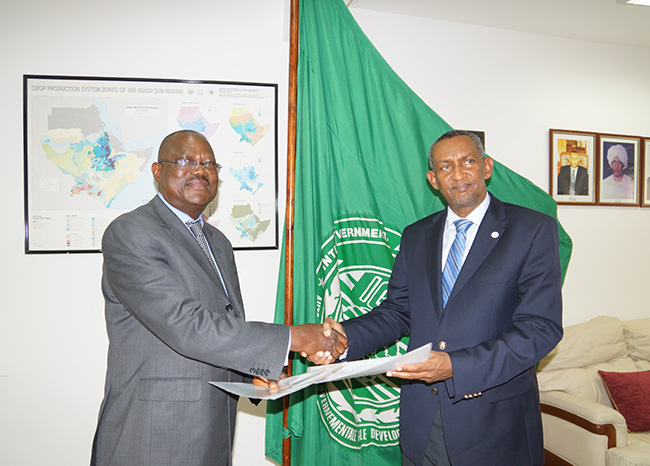 Djibouti, 28 November 2014: The Executive Secretary of IGAD, HE Ambassador (Eng.) Mahboub Maalim, received in his office Mr. Bamidele Ilebani, Addis Ababa based Director of UNOPS Africa regional Office and Representative to the African Union, for the signature ceremony of a Memorandum of Understanding between the two organizations on November 27, 2014.

During a casual brief ceremony in the office of the Executive Secretary where the two officials exchanged few remarks, it appeared that this was the first time IGAD and UNOPS are entering into an MoU.

Both parties expressed satisfaction about this MoU which took not more than two month to finalize. Mr. Mr. Ilebani said he was looking forward to working with IGAD while Ambassador Maalim reassured him that an action plan will follow for the implementation of the MoU.

“We agreed that we need to work together, and let me assure you that IGAD Organization has the ability to facilitate work for UNOPS within member countries as we have the ability to reach out to the highest level off decision making” Ambassador Maalim Said.

The MoU specifies that IGAD and UNOPS will cooperate in areas such as food security, economic and agriculture development, promotion of biodiversity, mitigation of the effects of drought , and security and peace building efforts.