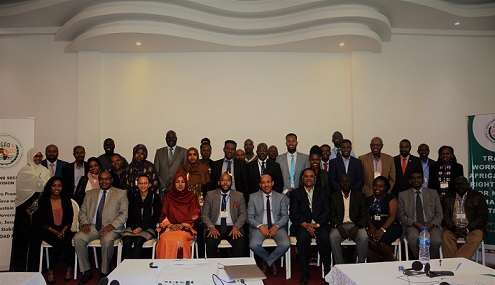 25 September 2019 (Addis Ababa, Ethiopia): The Political Affairs Program (PAP) under the Peace and Security Division of the Intergovernmental Authority on Development (IGAD) yesterday kick started a 3-day training to sensitize national experts and officials from Human Rights Institutions within Member States as well as build capacity on African Human Rights systems and chart ways through which there can be collaboration and effective complementarities.

National Human Rights Institutions (NHRIs) of the IGAD member states are required to protect human rights including and not limited to receiving, investigating and resolving complaints, mediating conflicts and monitoring activities; and to promote human rights through education, outreach, the media, publications, training and capacity building, as well as advising and assisting governments to comply with the Paris principles relating to the status of national institutions.

At the opening of the official statements, Mr. Bruck Yohannes representing the Director of the Peace and Security Division at IGAD emphasized trainings such as this was IGAD’s continuous effort in building capacity as an intervention for institutions in its member states working in the areas of democracy and good governance.

Representatives from the African Union Commission (AUC , Network of Human Rights Institutions and the Federal Government of Ethiopia also reiterated the dire need for cooperation and collaboration by all member states to promote and protect human rights of their citizens as detailed in the African Human Rights Architecture by ratifying, domesticating, implementing the treaties related to human rights and supporting national human rights institutions.

IGAD’s active role in supporting the work of NHRIs was recognized in linking and collaborating member states and NHRIs, further calling on IGAD and the African Union to provide continuous capacity strengthening support to ensure that they remain strong and effective as well as sensitizing their member states of the existing treaties.

Human rights have increasingly become prominent in the agenda of African Union and Regional Economic Communities (RECs). IGAD as a REC under the Peace and Security Strategy 2016-2020 recognizes deficits in good governance and protection of human rights being among the root causes of conflicts in the IGAD region and recommends for the support of democratic institutions of IGAD Member States to assist their effort in the promotion good governance and protection of human rights.

The training is with the financial support of Joint Financing Agreement (JFA) and being facilitated by Africa Union Commission (AUC), African Commission on Human and Peoples’ Rights (ACHPR), African Committee of Experts on the Rights and Welfare of the Child (ACERWC) and National Human Rights Institutions (NHRIs).

The Paris Principles were adopted in 1993 by the United Nations General Assembly which set out six main criteria that NHRIs require to meet; Mandate and competence: a broad mandate, based on universal human rights norms and standards; Autonomy from Government; Independence guaranteed by statute or Constitution; Pluralism; Adequate resources; and Adequate powers of investigation.​