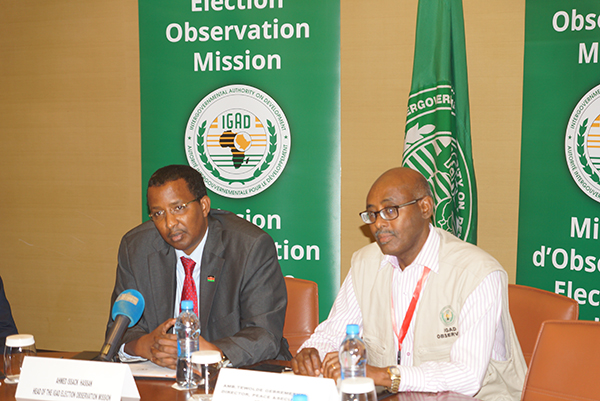 Djibouti, 10-04-2016: The Intergovernmental Authority o Development (IGAD) Election Observation Mission (EOM) deployed to observe the Djibouti Presidential Elections 2016 yesterday wrapped up its mission with the reading of a press statement of its preliminary findings in the presence of media houses.

The Preliminary Statement of the IGAD Electoral Observation Mission covers the mission’s findings from the date of arrival of the Mission on 5th April 2016 until the closing and counting processes on 08th April 2016 in the capital city and the District of Arta.

Members of the Election Observation Mission included 13 participants from IGAD Secretariat led by H.E. Mr. Ahmed Issack Hassan serving as Leader and Spokesperson of the IGAD Election Observer Mission. H.E. Mr. Ahmed Issack is otherwise the Chair of the Independent Electoral and Boundaries Commission (IEBC) of the Republic of Kenya, and Chairman of the Executive Committee of the Association African Electoral Authorities.

The overall objective of the Mission was to observe the Presidential Elections held on April 8th in Djibouti in the efforts by this country to conduct free, fair, and credible elections by providing positive and constructive feedback.

Upon arrival on April 6th, the IGAD EOM attended a meeting held by the Djibouti Ministry of Foreign Affairs and of the Djibouti Interior Ministry aimed at briefing all foreign electoral observation missions on the status of election preparation and preparedness. After which, they were all received by the President of Djibouti who was also a presidential candidate.

The IGAD mission took the time to meet with the civil society on top observing one of the campaign rallies.

On Election Day, members of the IGAD Election Observation Mission were organized in four teams of two observers each and deployed to different polling centers in Djibouti City to observe the elections.

FIND BELOW ATTACHED STATEMENT IN FULL 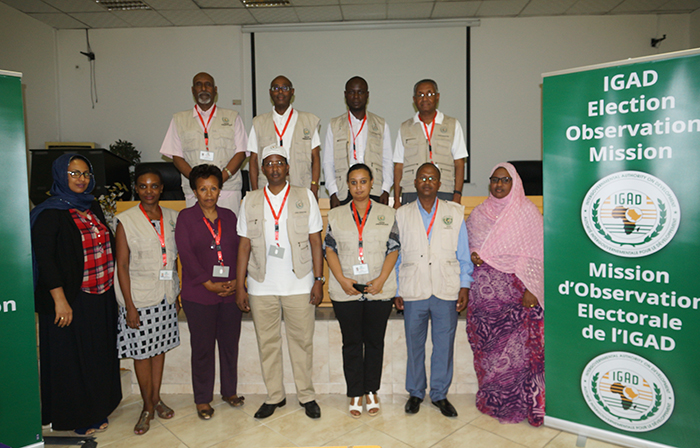