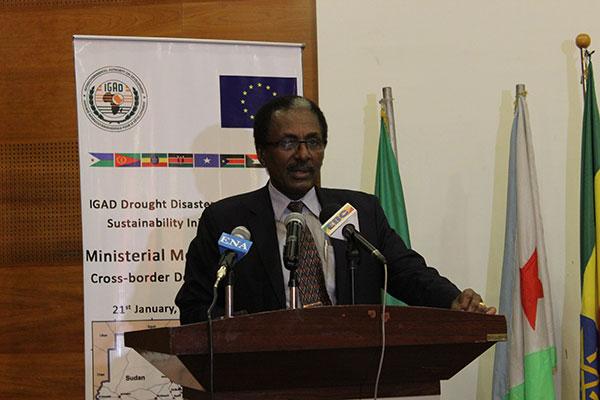 21-01-2017, Addis Ababa, Ethiopia: Ministers in charge of drought resilience agenda at Member States of the Intergovernmental Authority on Development (IGAD) this morning launched the project Collaboration in Cross-Border Areas of the Horn of Africa Region during an Extra-ordinary General Assembly of the IGAD Drought Disaster Resilience and Sustainability Initiative (IDDRSI) held in Addis Ababa under the chairmanship of the Minister of Livestock and Fisheries of Ethiopia, HE Prof Fekadu Beyene, and facilitated by the Executive Secretary of IGAD, HE Amb (Eng) Mahboub Maalim, with the Ambassador of Ethiopia to Djibouti, HE Amb Shamebo Fitamo Adebo, and the Head of the European Union Delegation to Djibouti and IGAD, HE Amb Adam Kulach, in attendance at the high table.

The project Collaboration in Cross-Border Areas of the Horn of Africa Region is aimed at developing cross-border areas between Ethiopia, Kenya, Somalia, and Sudan within the implementation of the IGAD drought resilience initiative (IDDRSI). The First Phase of the cross-border development projects is worth 63.9 million Euros and is funded by the European Union.

Speaking at the opening ceremony of the Launch, the Minister of Livestock and Fisheries of Ethiopia highlighted the commitment by his country, and IGAD Member States, to the implementation of the drought resilience initiative but also to fostering cross border collaboration through development projects such as the one launched.

The project launched today “along the cross border areas of Ethiopia, Kenya, Somalia, and Sudan has shown the commitment of the development partners to end drought emergencies in the Horn”, he said.

The Executive Secretary expressed appreciation for the high level representation from member states “which showcases the sense of ownership of such project that is the culmination following the 7th Steering Committee of IDDRSI meeting of yesterday”. Amb (Eng) Maalim also took the opportunity to acknowledge all development partners within the framework of the drought resilience Initiative at large, and within the cross-border project specifically, for providing “all means of support required from them for the operationalisation of IDDRSI”. He nevertheless pointed out to the looming drought emergency in the IGAD region.

Amb Kulach reminded the audience about the vulnerability of populations living in border areas in the IGAD region, and on the African continent generally. Such vulnerability is an open door for radicalization of youth, all kinds of trafficking, forced migration, and unwanted displacements, according to the Head of the EU Delegation.

“The borderland populations sometimes lack opportunities and they are preyed upon by ill-intentioned people”, he said. But, Amb Kulach also highlighted that borderlands can be seen as areas of opportunities where people connect and exchange. “This cross-border project could not have been launched outside the IDDRSI framework”, he said.

The meeting closed successfully with a brief ceremony to symbolize the launch with the cutting of a cake.