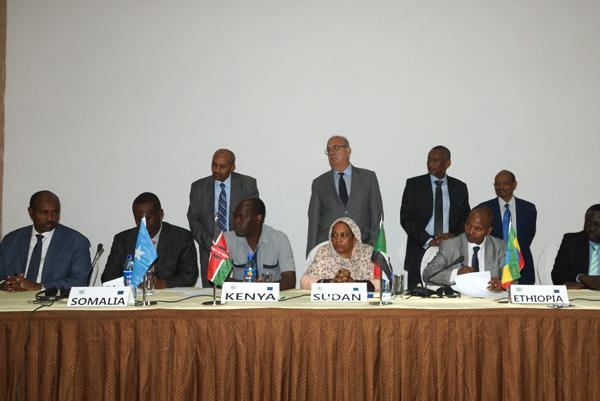 14-07-2017, Addis Ababa (Ethiopia): Ministers in charge of biodiversity, environment and natural resources drawn from Member States of the Inter-Governmental Authority on Development (IGAD) this morning adopted the IGAD Regional Biodiversity Protocol in Addis Ababa, Ethiopia, during a session that was chaired by the Minister of Environment, Forests, and Climate Change of Ethiopia, H.E. Dr. Gemedo Dalle.

The IGAD Regional Biodiversity Protocol was adopted alongside related strategies for the control and management of invasive species, conservation of transboundary wildlife and sharing of biodiversity benefits, as well as domestication of regional, continental and global instruments.

During his opening remarks, H.E Dr. Gemedo, noted the very high level commitment by Member States to the “conservation and sustainable use of biodiversity” that is “fundamental to sustainable development”. While noting that the endorsement of the regional protocol was “not enough to protect diversity resources in the region”, he highlighted that it was “rather the level of commitment to properly implement the Protocol that would contribute to the sustainable management of the biodiversity resources”.

Amb (Eng) Maalim made the link between drought/desertification and environment degradation: “the more the environment is degraded, the more the frequency of drought and the acceleration of desertification increases”; thus, the need to “focus on enhancing ecosystem resilience” and to have instruments, such as the Protocol, towards these goals.
Mr Puig Vara also had opening remarks to highlight the commitment by the European Union to the IGAD ecosystem resilience agenda.

Leading to the adoption of the Protocol and related strategies, the Biodiversity Management Programme that IGAD implements with the support of the European Union, organized a series of meetings to validate the documents.