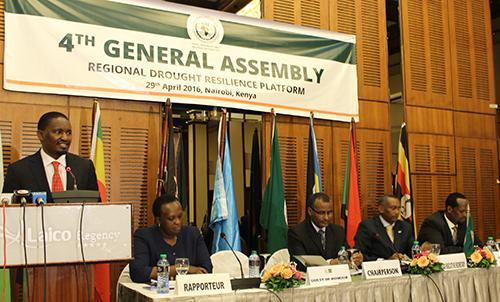 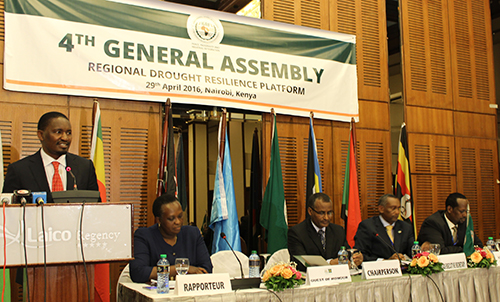 Hon. Mwangi during his opening remarks

29-04-2016, Nairobi: The Intergovernmental Authority on Development (IGAD) this morning held the 4th Drought Disaster Resilience and Sustainability Initiative (IDDRSI) General Assembly in Nairobi. The official opening ceremony was presided over by Hon. Mwangi Kiunjiru, Cabinet Secretary-Ministry of Devolution and Planning of Kenya, in the presence of Hon. Egziabher Yohannes, State Minister of Livestock and Fisheries of Ethiopia, and HE Amb. (Eng.) Mahboub Maalim, Executive Secretary of IGAD.

This 4th general Assembly was preceded by the 6th IDDRSI Steering Committee Meeting as regular preparation phase to the GA.

In his opening remarks, Hon. Mwangi highlighted that Kenya has made good progress in mitigating drought emergencies during the last couple of years even if challenges remained. He then gave a comprehensive overview of the various steps his Ministry and the government of Kenya took towards ending drought emergencies in the near future before declaring the GA open.

Amb. Maalim related the ddays preceding the GA where the 6th IDDRSI Steering Committee prepared the ground durg two days for the GA, and the IDDRSI Mid Term Review exercised on the 26th of April on the same venue. He assured the audience of the advanced status of the operationlization of the Initiative his organization has been in charge of.

Representatives of development partner organisations supporting IDDRSI, such as the United Nations Agencies, the World Bank Group, the African Development Bank, the United States Agency for International Development, and the European Union, also took the floor during the opening ceremony to reaffirm commitment and support to the Initiative.

Keynote address was delivered by the Governor of Mandera County, Kenya, in which he appraised the cross border approach to ending drought emergencies in particular and in addressing regional issues at large.

The below Communique’ was adopted at the end of the 4th IDDRSI General Assembly.###