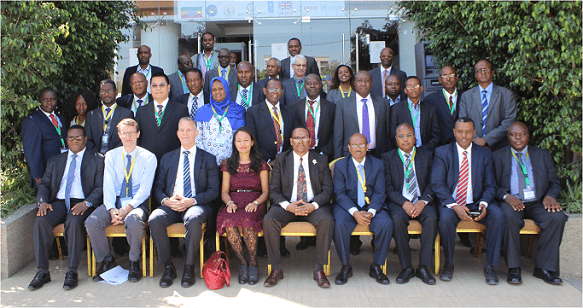 06-02-2017, Addis Ababa (Ethiopia): The Intergovernmental Authority on Development (IGAD) Climate Prediction and Applications Centre (ICPAC) this morning opened the Greater Horn of Africa Climate Forum for March, April, and May 2017 during an inauguration ceremony presided over by the Deputy Minister of Water, Irrigation, and Electricity of Ethiopia, HE Eng Wondimu Tekale, with the Director of Agriculture and Environment Division-IGAD, Mr Mohamed Moussa, and representatives from the United Nations system, the Department for International Development (DFID) of the United Kingdom, and the United States Agency for International Development (USAID) in attendance at the high table.

This Greater Horn of Africa Climate Outlook Forum (45th GHACOF) is bringing together officials in charge of climate and weather – as well as line ministries dealing with food security, livestock development, and public health – from Burundi, Djibouti, Ethiopia, Kenya, Rwanda, Somalia, South Sudan, Sudan, Tanzania, and Uganda, along with climate and weather experts from other parts of the world, development partners, and media practitioners.

The objective of the GHACOFs is to look back at the previsions and provisions for the past quarter that were agreed upon, and then issue projections for the quarter to come. This 45th GHACOF, whose theme is Mitigation and Response to 2016/17 Extreme Climate Events in the Greater Horn of Africa, comes at a time when drought is biting many parts of the region.

The Deputy Minister reminded the audience that the Forum was convened at a time when the region is concerned with drought effects resulting from the El Nino phenomenon of 2015/16. “We have been noticing increasing trends in frequency, intensity, and severity of droughts and occasional floods that have disturbed lives of millions and causing loss of property”, he said. HE Eng Tekale expressed the desire to cone to know at the end of the two-day Forum, if La Nina-led drought is likely to bring down rain water levels during the upcoming rainy season of March, April, and May. The Deputy Minister recognized ICPAC efforts in “developing reliable, proactive, and timely climate information” “in order to facilitate scientific guidance for decision-makers”.

Mr. Mohamed Moussa speaking for the Executive Secretary of IGAD estimated that “over 17 million people are severely affected by the drought and will need humanitarian support”. He announced that IGAD in collaboration with the UN will be “issuing an appeal in the next few days to mobilize funds for those affected by the current severe drought”.

Development partners present at the high table – USAID, DFID, and the UN system – pledged support to GHACOF as a key tool for the region in collection, analysis, and dissemination of information on climate.