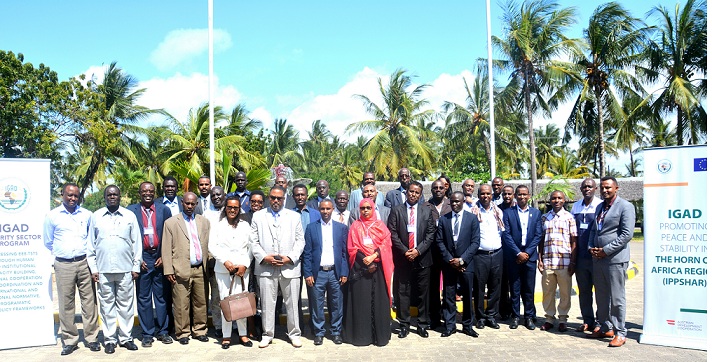 3.09.2019 (Mombasa, Kenya): The IGAD Security Sector Program (ISSP) this morning kick started a regional meeting with key institutions within the IGAD Member States with the objective to build their capacity in the prevention of and disengagement from radicalization, violence-led to terrorism and related threats by taking stock of the existing most effective development interventions.

This is the first training being undertaken by IGAD focusing on prison radicalization among Member States focusing on prison inmates who among them are youth and women, thus vulnerable to radicalization requiring urgent attention and focus through a future regional comprehensive programme in partnership with IGAD member states to deal with violence behavior in prison facilities.

There has been a potential linkage between imprisonment and radicalization to violence and terrorism have become a source of serious concern in many states across the globe. Often, perpetrators of terrorist acts have a criminal history, and there are cases of individuals having been recruited or radicalized to violence-led terrorism in the course of imprisonment.

Because of this, participants will also be trained on the process of radicalization in reference to different contexts including global good practices as well as consider possible roles of key actors through the sharing of knowledge, research and practical experiences on how radicalization in prisons and detention centers can be prevented.

In the official opening remarks, Commander Abebe Muluneh, Director at ISSP emphasized that prisons are highly unsettling environments in which individuals are more likely than elsewhere to explore new beliefs and associations.

“Confronted with existential questions and deprived of their existing social networks, prisoners with no previous involvement in politically motivated violence are vulnerable to being radicalized and recruited into terrorism because prisons are places of vulnerability and play an enormous role in the narratives of every radical and militant in the modern period” Commander Abebe went on to say.

“Individual deradicalisation and disengagement programmes aim to reduce the number of active terrorists in a given society by helping individual terrorists abandon terrorism as well as ease their re-integration into mainstream society. An urgent action is required to tackle concerns of prisons that brings together politically motivated offenders, including terrorists with ordinary criminals, creating the potential for an ‘unholy’ alliance looking into ways through which prisons can be less ‘vulnerable’ for individuals to have less likelihood of being radicalized” he added.

Member States have been urged to uphold human rights, ensure secure custody within safe and orderly institutions and use their prison intelligence to curb prison radicalization especially in managing terrorist/jihadist prisoners.

Through the training, the provision of comprehensive skills and capabilities will strengthen operational performance of the correction officers and help improve knowledge of human rights issues and rehabilitation of existing prisons and detention facilities in accordance with applicable international standards like the UN Standard Minimum Rules for the Treatment of Prisoners will help contribute to the development of sustainable mechanisms in order to ensure a sound implementation of alternatives to imprisonment as well as support the development of models, contingency plans, training manuals and guides for crisis managers and team members for a high profile/high security prison.

The training was conducted through the support from the European Union Trust Fund (EUTF) through the Austrian Development Agency (ADA) under the IPPSHAR Programme and is being facilitated by IGAD SSP and trainers from the academia like the Department of Education and Psychology Department of Addis Ababa University.