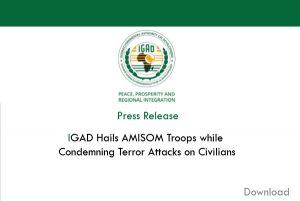 31-07-2017, Djibouti (Djibouti): The Executive Secretary of the Intergovernmental Authority on Development (IGAD), H.E. Amb (Eng) Mahboub Maalim, condemns the terror attack on civilians which claimed the lives of innocent Somali citizens on 30th July in Mogadishu, while commending the courage demonstrated by the AMISOM troops in Goryowein against the Al Shabaab attacks on the same day.

“I extend my heartfelt condolences to the families of the brave peacekeeping soldiers who lost their lives while serving the Government and People of Somalia, and to the Government of Uganda”, Amb Maalim said in his message.

IGAD Executive Secretary also offered his condolences to the families of the innocent Somali citizens who lost their lives in the terrorist attack and to the Government and People of Somalia.

“The bankrupt mission of this terror group is most amply demonstrated by its incessant attacks of peace keepers that are in place to support the Government of the Federal Republic of Somalia as well as on innocent civilians in public spaces”, Amb Maalim continued.

IGAD, as always, stands in solidarity with the gallant AMISOM troops who are heroically defending Somalia aspirations to normalcy, the elected Government of the Federal Republic of Somalia and its people who have proved to the world that nothing can defeat their legitimate quest for peace and prosperity.