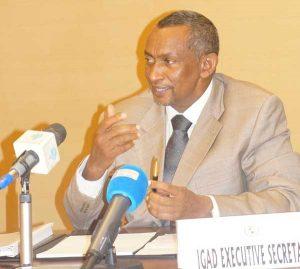 The Executive Secretary of the Intergovernmental Authority on Development (IGAD) Amb(Eng.) Mahboub Maalim expressed deep concern over the latest wave of Xenophobic attacks against foreign African nationals that has gripped parts of South Africa over the past week. Amb. Maalim described the attacks that continue to attract wide media attention as unfortunate and requiring urgent action.

Ambassador Maalim who made these remarks earlier today from Washington DC where he is on official mission, further noted with regret that citizens of IGAD Member States are among those directly affected.

While acknowledging and commending measures being taken by the Government of South Africa to restore law and order in affected areas, he called for further decisive measures to stop the attacks. Amb. Maalim also acknowledged and commended action being taken by the governments and diplomatic missions of IGAD Member States in South Africa towards protection and repatriation of their affected citizens.

Amb. Maalim concluded his comments by recalling that the history of South Africa is emblematic of African solidarity. He further echoed the remarks made by the Chairperson of the African Union Commission, Dr. Nkosazana Dlamini Zuma, yesterday who stated that the challenges faced by South Africa, poverty and unemployment, are challenges faced by all countries on the continent. Therefore, he added, these countries need to work together to address these challenges and build a better future for their citizens.