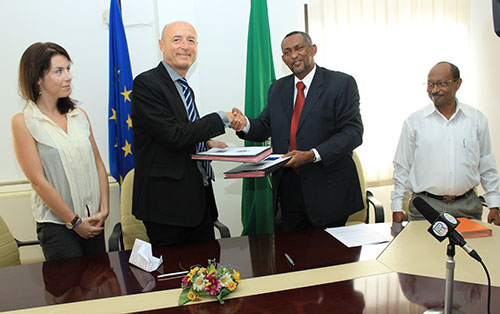 Djibouti, 06-13-2013 – The signing ceremony of the Agreement on Maritime Security between the Secretariat of the Intergovernmental Authority on Development (IGAD) and the European Union took place this morning at the Headquarters of the IGAD in the presence of the Executive Secretary of IGAD, Ambassador (Engineer) Mahboub M. Maalim, and the Ambassador and Chief of the European Union Delegation to Djibouti and IGAD, HE Joseph Silva. This agreement is the culmination of a program to fight against maritime piracy in the region titled Project MASE that, in addition to the IGAD and the European Union is comprised of COMESA, the East African Community, and the Indian Ocean Community.

With a budget of 37.5 million Euros (over 835 million Djibouti francs) for a period of three years, Project MASE is aimed at combining the efforts of these four areas of economic integration in their fight against piracy off the Somali coast.

IGAD is endowed with the specific task of implementing, within the framework of the MASE Project, the strategy against piracy in Somalia it had drafted on the basis of a study previously conducted.

All actors in this project, namely IGAD, COMESA, the Community of East Africa, and the Indian Ocean Community will each have different and complementary roles. All IGAD member states will be involved and will be participating in the steering committees of the Project. Djibouti is particularly important due to its geographical location and the fact that it is hosting the implementation of the Djibouti Code of Conduct in the fight against piracy in the region.

IGAD is a regional economic community comprised of Djibouti, Eritrea, Ethiopia, Kenya, Somalia, South Sudan, Sudan, and Uganda with a total population of over 200 million inhabitants.