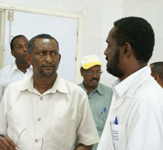 (IGAD – Djibouti) In continuation of his familiarisation tour around the region, the IGAD Executive Secretary, Eng. Mahboub Maalim visited, on Sunday 31st August 2008, the Djibouti Regional Livestock Quarantine located at Damerjog, some 10 km from Djibouti town on the way to Somalia. He was in the company of Mr. Ali Haribou, the FAO Representative to Djibouti and to IGAD. They were led around by the Director of the Livestock Department of the Ministry of Agriculture, Livestock and the Sea, Dr. Moussa Ibrahim and the Quarantine Technical Manager, Prof. Babiker Abbas.

The Executive Secretary was impressed with the success of the Quarantine which clears for export over 2 million animals a year, mostly sheep and goats, but also camels and cattle. He underscored the importance of the quarantine in facilitating and promoting livestock exports from the region and in contributing to economic development in general considering that a large part of the population in the region is dependent on livestock.