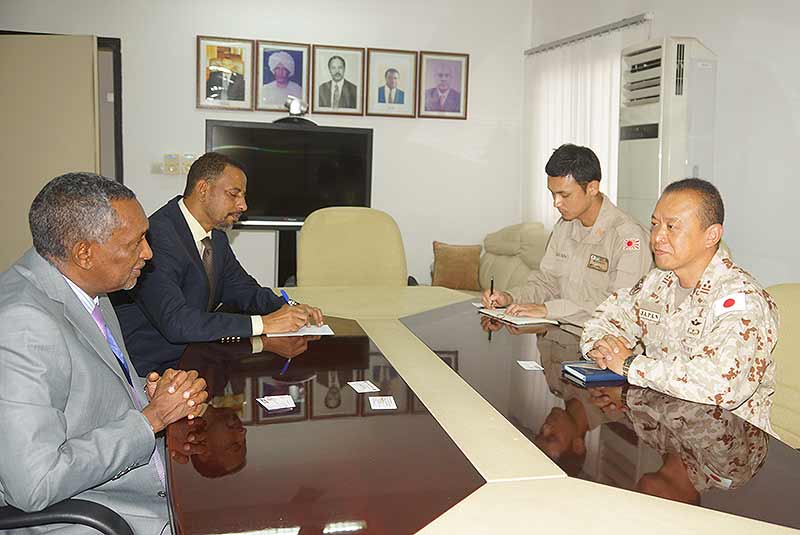 IGAD ES Receives Commander of Japanese Base in Djibouti

Home » IGAD ES Receives Commander of Japanese Base in Djibouti

04-11-2017, Djibouti (Djibouti): The Executive Secretary of the Intergovernmental Authority on Development (IGAD), H.E Amb (Eng.) Mahboub Maalim, received the Commander Officer of the Japanese Base in Djibouti on 2nd November in his office at the Secretariat.

Upon his welcome words, Amb Maalim briefed the Commander about the support provided by the government of Japan to IGAD within the Peace & Security Programmes.

“Japan is a key partner with our organization but also with each IGAD Member State on a bilateral basis”, The Executive Secretary said.

He added that Japan’s partnership is steady and predictable to his appreciation and that it is a long time relationship.

“As IGAD Secretariat is in Djibouti and that Japan has a military base in Djibouti as well, it should be convenient for us to work together. We for instance have a Centre of Excellence for Preventing/Combating Violent Extremism (CVE) in Djibouti, a Maritime Security Programme, and a Counterterrorism Programme under our Addis Ababa-based security Sector Programme”, he said.

Amb Maalim concluded that IGAD is willing to enhance cooperation with Japan and will be seeking areas of engagement with the Japanese military presence.

The Commander appreciated the warm welcome by the ES.