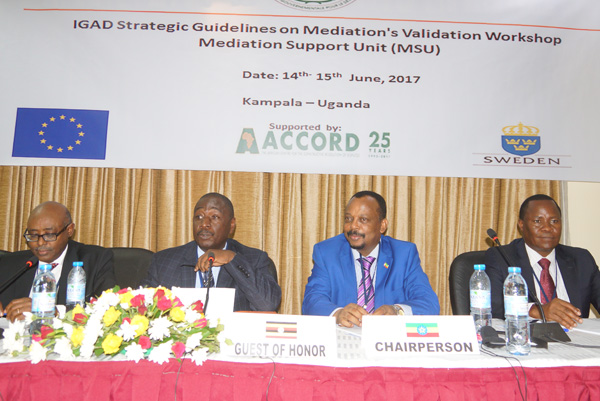 IGAD Endows itself with Strategic Guidelines on Mediation

Home » IGAD Endows itself with Strategic Guidelines on Mediation

14-06-2017, Kampala (Uganda): The Intergovernmental Authority on Development (IGAD), this morning opened a Validation Workshop on Strategic Guidelines on Mediation for IGAD Mediators under the leadership of the Ambassador of Ethiopia to Djibouti and Chair IGAD Committee of Ambassadors (COA), H.E Amb Shamebo Fitamo.

This two-day workshop is bringing together members of IGAD Committee of Ambassador (COA) and the members of the IGAD Roster of Mediators for the purpose of validating the draft IGAD Strategic Guidelines on Mediation for the IGAD Mediation Support Unit (MSU).

This meeting is also an opportune moment for IGAD Committee of Ambassadors and IGAD Rosters of Mediators to interact, identify and discuss some of the challenges faced so far, as well as to engage member states on several accounts related to conflict prevention through preventive diplomacy and mediation. It is providing an opportunity for members of IGAD COA to acquaint themselves with members of IGAD Roster of Mediators, and to be briefed on the development of IGAD MSU and the IGAD normative capacity on Mediation which is in line with the COA Resolution of September 2012.

In his opening remarks, Ambassador Fitamo recalled that as “early as the 1990s, the IGAD region has been and is currently playing a crucial role in mediation and peace process”. He recalled the high level mediation efforts by IGAD in South Sudan and Somalia notably. He also highlighted that the outcomes of the meeting were “expected to strengthen the region’s mediation and preventive diplomacy capacity”. “It would also give an impetus to resolve disputes amicably without embarking on violence and anarchy”, he said in conclusion.

The Director of Peace and Security Division-IGAD, Ambassador Tewolde Gebremeskel, told the audience that the Mediation Strategy Guidelines were “the beginning of our effort to institutionalize preventive diplomacy and mediator”. He took the opportunity to recognize the commitment by the members of the IGAD Roster of Mediators for their time and efforts in the development of the mediation guidelines document from inception to validation. He also recognized the members of the Committee of Ambassadors. “I am confident that the COA will take the opportunity to share their experiences and interact with Roster members during this two days deliberation”, he said.

The IGAD Focal Point at the Ministry of Foreign Affairs of Uganda, Ambassador Paul Mukumbya, officially opened the workshop in his capacity as Guest of Honour after brief welcoming remarks.

According to Dr Aleu Garang, Coordinator of the IGAD Mediation Support Unit, these Strategic Guidelines on Mediation document “serve to inform Mediators on steps to be followed in order to achieve professionally oriented, politically correct, and impartial efficient intervention in conflict prevention or mediation processes”.

The workshop is held in partnership with the African Center for the Constructive Resolution (ACCORD) and financial support from the Kingdom of Sweden and the European Union. 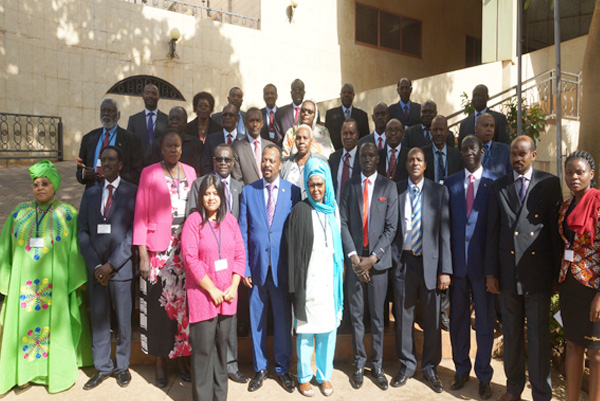