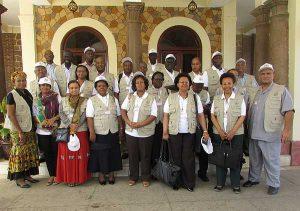 In response to the invitation by the National Election Commission (NEC) of Sudan, the Inter-Governmental Authority on Development (IGAD) has deployed an Election Observer Mission to Sudan to observe the election in the country, scheduled to be held from April 13-16 April 2013.

The objective of the IGAD Election Observer Mission is to assist the Republic of Sudan in its efforts to conduct credible elections by providing positive and constructive feedback that would help development of a democratic election culture, which will contribute to averting conflicts related to election disputes.

The advance coordination team of the IGAD Election Observation Mission arrived in Khartoum on 02 April 2015 to finalize logistical and other arrangements for the main observer team that arrived in Khartoum on 06 April 2015. The Advance mission had paid courtesy visit to the National Election Commission and was received by the officials of the Commission. It had also taken part in a press conference organized at the Sudanese Media Centre where the Head of Mission announced the arrival of the IGAD Election Observer Mission.

Since its arrival in Khartoum, the Observer Mission was briefed by and consulted with various stakeholders of the election process. The Head of mission and some members of the Observer Mission met with CSO representatives and other observer missions in the country and will continue to interact with similar observer missions deployed to observe the elections in Sudan.

The Observer Mission participated in two days refresher training on election observation organized by the IGAD secretariat during which they have been briefed about the overall security and political situation of the country. The members of the mission attended a briefing organised by the Election Commission of Sudan on April 9, 2015 at Rotana Hotel where the officials of the Commission give detailed information on the general preparation for election.

The IGAD Observer Mission will be heading today to 8 deployment areas in eight teams. The Election Observers will closely observe the poll opening, polling, poll closing and counting and tallying stages of election process to take place from 13-16 April 2015. The Head of the IGAD Election Observer Mission officially launches the deployment of IGAD observers to their respective assigned areas. It is the wish of IGAD that the election is conducted in a peaceful and transparent manner and in full conformity with the laws and regulations of Sudan as well as universally accepted principles of conduct of election.