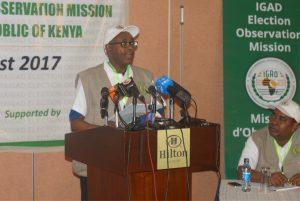 07-08-2017., Nairobi (Kenya): The Inter-Governmental Authority on Development (IGAD) has deployed an Election Observer Mission to the Republic of Kenya to observe the presidential, Governors and Parliamentary elections in the country, scheduled to be held on August 08, 2017.

We believe that the IGAD region is making progress in regard to elections, which is a key activity in the process of democratization in the region. Kenya, as part of the region has also made notable progress as is evidenced in the peaceful 2013 elections in the country. The election was conducted under a new Constitution that devolved power to the counties.

Such progress in peaceful election is achieved because the new Constitution had empowered the people of Kenya and most importantly, because Kenyans had learnt from their past experience that violence is destructive and it destroys community cohesion, destroys the democratic process, destroys human life and development that took years to build.

IGAD has experience of observing elections in the region since 2010. Our observation is based on the African Union guidelines and international standards for elections observation and monitoring missions. After every election observation, IGAD reports to its Member States so that every country benefits from the different experiences of conducting elections.

It is with the same spirit that our mission will observe the Kenyan elections of 2017. We believe that observing the 2017 elections in Kenya will enhance our capacity as international observers and add to our cumulative experience to share with our Member States.

The IGAD Observer Mission is composed of participants from IGAD Secretariat from different member states. The main objective of the IGAD Election Observer Mission is to assist the Republic of Kenya in its efforts to conduct credible and free elections by providing positive and constructive feedback that would help in the development of a democratic election culture, which will contribute to averting conflicts related to election disputes.

The IGAD Election Observation Mission is led by Amb. Tewolde Gebremeskel, Director of the Peace and Security division of IGAD. It has arrived in Nairobi on 03 August 2017.

Since their arrival, the Head and other members of the Observer mission had paid courtesy visit to the Independent Electoral and Boundaries Commission (IEBC), and were received by the Chair and other officials of the Commission.

The IGAD Observers had also met with the Principal Secretary of Ministry of Foreign Affairs of the Republic of Kenya. They also attended a briefing organized by the IEBC whereby the commission announced to the public IEBC’s readiness to conduct the election and provided updates to the public on various aspects of the election including logistics and security.

The IGAD Observer Mission also held a meeting where the members have been briefed about the overall security and political situation of the country, as well as the Kenyan Election laws and overall observation details of the mission. The mission will continue to interact with other observers throughout its presence in Kenya.

The IGAD Observer Mission will be heading today to their deployment areas and assess the situation. The Election Observers will closely observe the poll opening, polling, poll closing and counting and tallying stages of election process to take place on the Elections Day.

The Head of the IGAD Election Observer Mission officially launches the deployment of IGAD observers to their respective assigned areas. It is the wish of IGAD that the election is conducted in a peaceful and transparent manner and in full conformity with the laws and regulations of Kenya as well as universally accepted principles of conduct of elections