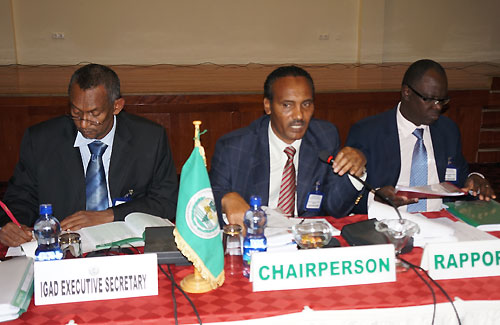 The 24th Meeting of IGAD Committee of Ambassadors convened today in Addis Ababa, Ethiopia. In this one day meeting, the ambassadors discuss the administration matters of IGAD Secretariat as well as the current political events of the region.

“This regular meeting is taking place while our regional organization, IGAD, is registering tremendous achievements on the one hand and facing serious challenges on the other hand,” said H.E. Ambassador Suleiman Dedefo Weshe, the Ambassador of Ethiopia to Djibouti and the Chairman of IGAD Committee of Ambassadors. “Both the achievements and continued challenges lie in political, food security, social and Peace and Security,” added the Ambassador.

H.E Suleiman Dedefo Weshe underscored the importance Member States place in the peace and stability of the region. “All peace processes undertaken by IGAD have been successful because of the joint efforts made by member countries to realize their common visions through IGAD,” said the Ambassador.

“We believe that the stride of all peace loving countries of IGAD region, which brought about improvement of the situation in Somalia, will also work hand in hand to avoid more bloodshed and destruction of property along the border between the Sudan and South Sudan,” he said. The Ambassador, however, warned that abstaining being part of the peace efforts will put all the past achievements at a serious risk.

Eng. Mahboub Maalim pointed out the importance of changing course from drought management and recovery to drought resilience. “The question is not any more if there is going to be a drought,” he said “Drought, in our region, is reality of live.”

The Executive Secretary reported that efforts to build the capacity of the organization are underway. “There is no organization in the world that can claim they have hundred percent of the needed capacity,” Said Eng. Mahboub Maalim and urged Member States to step up their support.

The Chairman of the Committee also called upon Member States to give more attention to consolidate IGAD and transform in order to “transform the region into a stable, integrated, prosperous and independent Horn of Africa.”