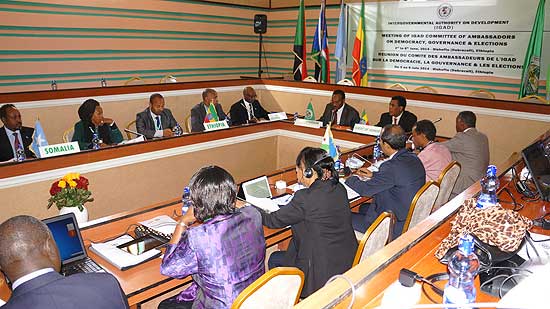 IGAD Committee of Ambassadors Endorse Protocol and Code of Conduct

A meeting of the Committee of Ambassadors of the Inter-Governmental Authority on Development (IGAD) organized by the Peace and Security Division was held from 03-06 June, 2014 in Bishoftu, Ethiopia.

The purpose of the meeting was to consider the draft regional baseline Study Report on Democracy, Governance and Elections and the Draft IGAD Protocol on the same. The Committee was also to consider the Draft IGAD Election Code of Conduct and Guidelines for Election Observers developed based on request by the 45th session of the IGAD Council of Ministers.

The Meeting was chaired by Ambassador Suleiman Dedefo, Ambassador of the Federal Democratic Republic of Ethiopia to the Republic Djibouti.

The opening Statement was delivered by Ambassador Tewolde Gebremeskel, Director of the Peace and Security Division, on behalf of the Executive Secretary of IGAD, Ambassador (Eng) Mahboub Maalim, who could not be able to participate in the meeting due to other urgent matters.

Participants of the meeting were welcomed by Ambassador Dina Mufti, Guest of Honour and representative of the host Government.

The meeting of the Committee of Ambassadors thoroughly examined the following draft documents:

Presented to it by the Secretariat, endorsed the documents and recommended their presentation to the next regular session of the IGAD Council of Ministers for approval.

The Committee of Ambassadors underscored the importance of Democracy, Governance and Elections and commended the Secretariat for the initiative taken regarding the issues and for the facilitation to finalize the Draft Protocol.

The meeting was conducted in a very friendly and cordial atmosphere.