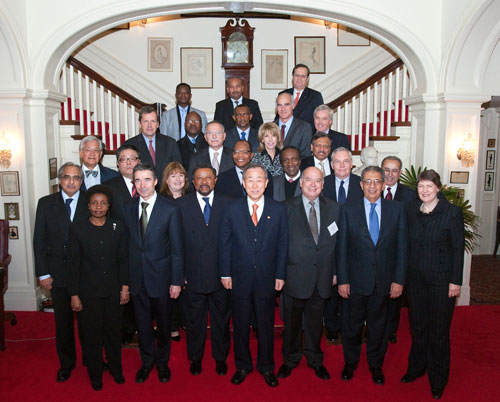 At the invitation of the UN Secretary-General, H. E. Eng. Mahboub Maalim, Executive Secretary of IGAD, attended the UN Secretary-General’s High-Level Retreat with Heads of Regional and other Organizations which was held at Greentree Estate, New York, on 9 June 2012. He was accompanied by Dr. Debalkew Berhe, PM for environment Protection.

The objective of the retreat was to share experience and information and chart new avenues for cooperation in acting early to prevent conflicts as well as discussions on transnational and emerging challenges to peace and security, which included terrorism, organized crime and drug trafficking networks, piracy, cross-border rebel groups, pandemics and climate change.

The meeting was officially opened by H. E. Ban Ki-moon, Secretary-General of the United Nations. He thanked the Heads of Regional and other Organizations for having found time to attend the retreat despite their busy schedules. He recalled the thematic areas that were discussed during a similar retreat held in January 2010 which enabled him to make concrete recommendations to the General Assembly and expressed that the outcomes of the discussions from this retreat would lead to the same result. After giving a brief introduction to each theme of the retreat, the Secretary-General invited some lead Regional

It was noted that preventing conflicts has been a core pillar of the UN and the Regional Organizations, with preventive diplomacy being conducted by an array of actors, using a wider range of tools to prevent violent conflicts as well as strengthen operational crises response machinery of UN, regional and sub-regional organizations and member states. In this regard, early warning systems have been put in place at national, sub-regional, regional and international levels. It was noted that the key challenges for cooperation between the UN and regional organizations in the area of conflict preventions were early warning and early action, resources, sustainability and learning and applying lessons.

The Executive Secretary shared IGAD’s experience on preventing conflicts with the participants of the retreat and made the following proposal to enhance acting early to prevent conflicts:

1.    Acting early requires well functional early warning systems at all levels, which need to be linked or networked at all times
2.    Collection of data, processing of data into information and interpretation the information correctly is crucial to prevent conflicts
3.    Mandate of UN and regional organizations should be strengthened to allow them collect data/information at any time anywhere within member states territories. The issue of sovereignty should not be a hindrance for action.
4.    Having the same understanding of the cause of conflicts at all levels essential to prevent conflicts
5.    Actions to be taken at all levels in an integrated manner by taking in to account the comparative advantage of the organizations at all levels.

2. Transnational and Emerging Challenges to Peace and Security

It was noted that state security is not enough as today the world is exposed to a range of transnational security challenges, which have been exacerbated by current political, economic, technological and environmental challenges. Progress in science and technology in certain sectors and if these technological advances, such as nuclear technology, are accessed by criminals, it could pose a real threat to humanity. Criminals have started to abuse the internet to misinform and mislead the youth for their criminal activities. It was further noted that transnational threats are no more regional, but international, both in their cause and solutions. Illicit drugs span multiple continents, which need concerted and collective actions at all levels.  In this regard, the UN has played an important role in addressing transnational threats and their multi-faceted effects through awareness creation, norm-setting – UN facilitated Conventions, policy coordination, humanitarian assistance, and capacity building.

Eng. Mahboub shared IGAD’s activities in addressing transnational threats, particularly the IGAD Security Sector Programme (ISSP). He then proposed the following activities to strengthen the cooperation of the different stakeholders at all levels: