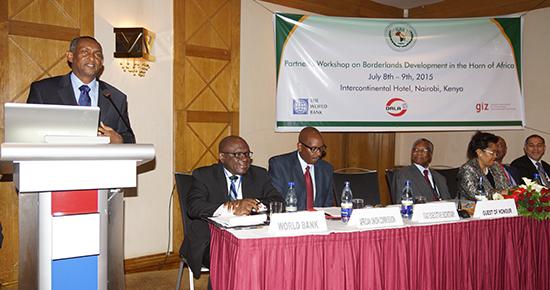 IGAD and Partners for the Development of Borderlands in the Region 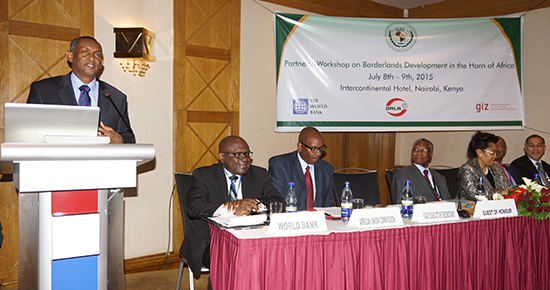 This two-day workshop is gathering government representatives at national and local levels, from IGAD member countries (Djibouti, Ethiopia, Kenya, Somalia, South Sudan, Sudan, and Uganda) as well as community representatives on top of representatives from partner organizations and development partners.

The purpose of the partnership workshop is to respond directly to country requests for enhanced development support in the context of the Horn of Africa Initiative, which was launched in October 2014 by the UN Secretary General, the World Bank President, the President of the Islamic Development Bank, the African Development Bank, the European Union, the IGAD Council of Ministers, in partnership with IGAD and the AU.

Key remarks were delivered by all high level delegates at the high table, including the Secretary Executive of IGAD, Ambassador (Eng.) Mahboub Maalim, the Director of the World Bank Group, Mr. Colin Bruce, and the Guest of Honour from the government of Kenya.

Mr. Colin Bruce highlighted that the workshop was important and timely. He added that he was expecting activities to be identified that can be undertaken. “This workshop should also be an opportunity to influence a more global agenda in the subject matter, and not only for the IGAD region”’ he said before reminding the WBG commitment to assisting IGAD towards the achievements of its mandate.

Ambassador Maalim thanked all participants and partners before adding that this workshop on Borderlands Development builds on the Resilience agenda of IGAD. “We are here today as we want to put more vigour in our Resilience agenda”, he said. He then gave the audience a brief overview of the Horn of Africa Initiative and the IGAD resilience Programme.

The objectives of the workshop are to: (i) hear from governments and communities their immediate priorities and to confirm their commitment to lead; (ii) agree on the additional analysis required on the root causes of underdevelopment; (iii) identify possible future short and medium term priorities, possibly including pilot programs; (iv) explore innovative approaches to project and service delivery and monitoring and evaluation; and (v) agree on a coordinating framework and a mechanism for ongoing and proposed joint work.

Finally, the Guest of Honour declared the workshop open while encouraging participants to engage fruitfully.