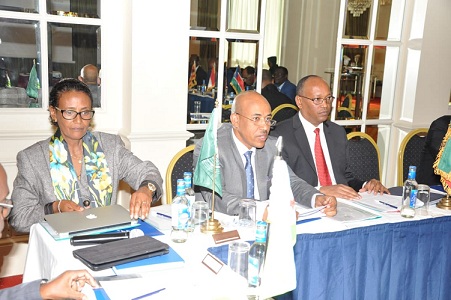 IGAD AMBASSADORS DEBRIEFED ON THE IMPLEMENTATION AND STATUS OF THE PEACE AND SECURITY STRATEGY, EU FUNDED PROGRAM – IPPSHAR PROGRAMME AND REVIEW GUIDING PRINCIPLES AND RULES OF PROCEDURE OF THE IGAD GOVERNANCE FORUM

Home » IGAD AMBASSADORS DEBRIEFED ON THE IMPLEMENTATION AND STATUS OF THE PEACE AND SECURITY STRATEGY, EU FUNDED PROGRAM – IPPSHAR PROGRAMME AND REVIEW GUIDING PRINCIPLES AND RULES OF PROCEDURE OF THE IGAD GOVERNANCE FORUM

21 May 2019 (Nairobi) Kenya: The Intergovernmental Authority on Development (IGAD) Committee Ambassadors (COA) the last two days in Nairobi, Kenya were briefed by the Peace and Security Division (PSD) on various peace and security related matters as well as the implementation status of the IGAD Peace and Security Strategy of 2016-2020 as well as the processes and status of the EUTF with complimentary support of Austria, Sweden, and Netherlands funded program – IGAD Promoting Peace and Security in the Horn of Africa Region (IPPSHAR) and role of the Austrian Development Agency in implementing the program.

The Committee also got to review the draft Guidelines and Principles of the IGAD Governance Forum and the ambassadors requested for more time to review after which will be endorsed.

The Director of Peace and Security Division, Hon. Siraj Fegessa, in his opening remarks highlighted the challenges that are facing the region mainly the internal conflicts instigated by various reasons, the common transnational security threats and the external influences that are affecting the region.

Hon Fegessa also mentioned the positive changes that are happening in the region following the normalization of the relations between Ethiopia and Eritrea and the agreements in the region for more cooperation and collaboration. The Director stressed on the need to be guided by the policy organ to implement the peace and security strategy and also to build upon the on-going positive changes and contribute to the efforts of the member states.

The Chair of the IGAD Committee of Ambassadors, H.E Ambassador Abdulaziz Mohammed in his remarks also pointed out the key challenges that are affecting the agenda of economic integration of the IGAD countries.

He also stressed on the need to acknowledge the positive contribution of the bi-lateral relations in the region such as the relation between Ethiopia and Djibouti and also the existing relations between other IGAD countries as these bi-lateral relations contribute to broader agenda of the regional integration.  The Chair also emphasized on the need to work on the agenda of governance as lack of governance and democracy create basis for conflicts in the region.

The Committee also recommended that internal synergy and harmonization of programs need to be enhanced by the different units under PSD through sharing information with the ambassadors for Member State engagement and involvement and where necessary regularize briefings on IPPSHAR and PSD to make efforts to mobilize resources for the post-war recovery as countries slide back to conflicts if they are not assisted during the period of transition to peace.

The Committee was also briefed on the challenges faced by the organization regarding the sustainability of human resources due the huge dependency on funding from partners under which it tasked the GAD Secretariat to handle by liaising with the Member States fto make regular and timely contributions to IGAD.

The Committee was also briefed on recommendations of the IGAD Member States’ focal persons from the Ministries of Foreign Affairs that were presented at the Peace and Security Division (PSD) annual review meeting and briefing about IPPSHAR in March 2019.

It was recommended by the Committee that more awareness of the processes of IPPSHAR needs to be done at both technical and policy level in the Member States with a clear strategy for sustainability through activity linkages with similar institutions of the member states.