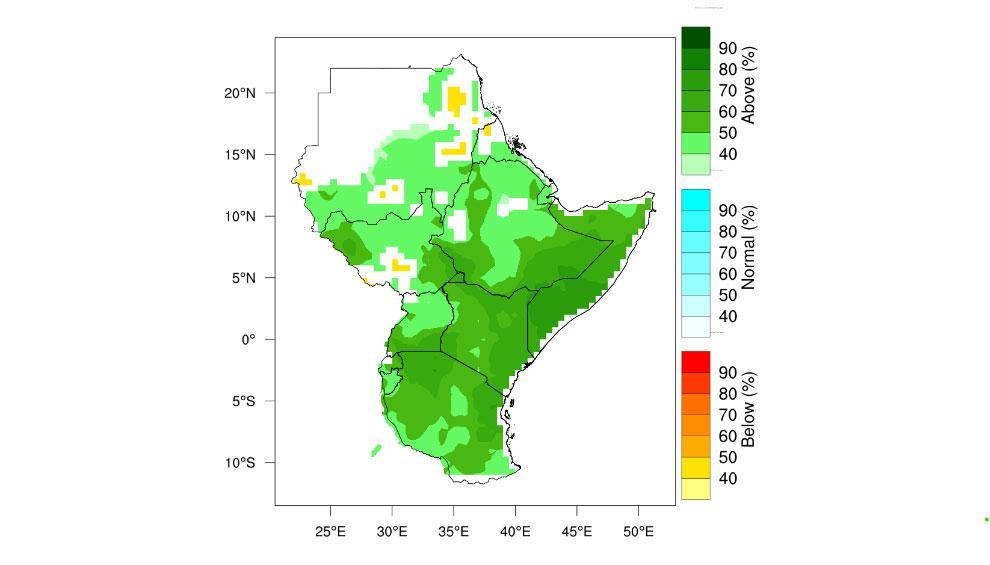 Nairobi, 2019: A tropical storm named KYARR has been developing in the northern Indian Ocean and is expected to reach Puntland and Somaliland in 4 to 5 days. The affected areas will experience strong winds and light rains.

The Indian Ocean Dipole (IOD) is in one of its strongest positive states since 2006. In this state, warm moist air flows westwards inland increasing the likelihood of higher rainfall over East African countries. Although it is difficult to attribute the source of any floods or other weather impacts to a single cause, the heavy rains currently experienced in the region are likely associated with this positive Indian Ocean Dipole (IOD) state. These heavy rains and flooding have already led to losses in property and livelihoods in parts of Ethiopia, Somalia, South Sudan, and Kenya. “According to our monthly and seasonal forecasts, higher than usual rains are expected to persist throughout November and December. We encourage all stakeholders to take the necessary measures to mitigate the potential impacts” says Abubakr Salih Babiker, Climate Scientist at ICPAC.

Overall, the current forecast presents positive prospects for increased crop yields for major cereals in the equatorial and southern agricultural areas of the region as well as improvement in pasture, range and water resources for livestock. In the northern parts of the region where the crops were in advanced stages of maturity, the increased rainfall activity poses the risk of interrupting crop maturation and harvesting. The risk of flooding is high and wet conditions might increase the risk of crop fungal and bacterial disease outbreaks, and livestock diseases such as Rift Valley Fever in disease-prone regions. If the wet conditions continue beyond November – December, the usual cessation dates, there may be challenges with harvesting and post- harvest crop management, and this could lead to significant post-harvest losses in both grain quality and volume.