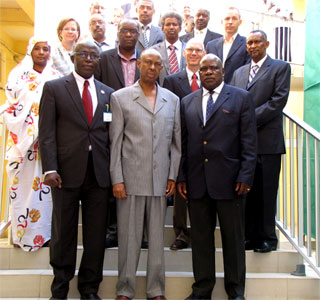 Djibouti 6 December 2010 –  The  African Union Commission Initiatives against Trafficking (AU.COMMIT CAMPAIGN) was at the center of reflection today, Monday 6 December 2010, at a workshop bringing  high officials of the Intergovernmental Authority on Development (IGAD), the East Africa Community (EAC),  and the International Organisation for Migration Special Liaison Mission (IOM/SLM), Addis Ababa, Ethiopia in a bid to curb the rate of human trafficking in Africa, especially women and children.

The consultative workshop to launch the AU.COMMIT for the IGAD and EAC regions was chaired by Mr. Mohamed Barkat Abdillahi, Minister of Justice of the Republic of Djibouti.

Addressing the participants during the opening ceremony, the Director of Social Affairs of the African Union Commission (AUC),  Dr. Olawale Maiyegun, underscored the need for the respect of the rights of women and children saying , trafficking is a grave violation of human rights in particular the right to liberty, human dignity, and the right not to be held in slavery or involuntary servitude.  « Now that the campaign is launched, we cannot stop there.  We need to take this opportunity to indeed galvanise and implement the AU.COMMIT regionally and nationally” he underlined.

On behalf of the Commissioner of Social Affairs of the AUC, Mrs. Bience Gawanas, Director Olawale urge the IGAD and EAC Member States to galvanise their commitments to the cause of the AU-COMMIT Campaign by ratifying the Protocol and implementing the Ouagadougou Action Plan.

Speaking earlier, Eng. Maalim Mahboub, Executive Secretary of IGAD said, apart from sensitising the Member States on the need to combat trafficking in Africa, this workshop endeavours to raise awareness of the continued commitment towards addressing trafficking in human beings. He explained that, the workshop is timely as it is taking place when IGAD is currently designing programs pertaining to human security and protection of regional victims of trafficking through building capacity for prosecution of traffickers in the region. “The Horn of Africa, which mostly comprises the IGAD countries share common concerns about the movement of irregular migrant populations, whether inspired by a search for economic opportunity or other motivations”, Mr. Mahboub noted.

In her address, Mrs. Antoinette Okimba, United Nations High Commission for Refugees (UNHCR), indicated that her institution has taken a series of actions to protect victims of human trafficking and those at risk of being trafficked. She said, the fight against human trafficking requires joint and comprehensive efforts from the state, civil society and the international community. “We have no illusion that we can totally eradicate trafficking in the short and medium term”, she stressed.

Mr. Josiah Ogina, Head of Mission of the International Organisation for Migration (IOM) Special Liaison Office to Addis Ababa, on his part said since the adoption of the Ouagadougou Action Plan to combat trafficking in human beings, especially on women and children by the African Union in 2006, IOM has been closely working with the AU to ensure the dissemination of the instrument at continental, regional and national levels.

Other key speakers at the launch of the AU-COMMIT Campaign in Djibouti included Mr. Leonard Onyoni, from the EAC Secretariat and Mr. Vanden Brueke Simon, Head of the Cooperation and Political Section of the European Union Delegation to Djibouti. Both men underscored the need to work hand in hand to ensure the success of the campaign in Africa.
The consultation workshop on AU COMMIT Campaign  is aimed at sensitising the RECs, and Member States of IGAD and EAC on the operationalisation of the Ouagadougou Action Plan to Combat Trafficking in Human Beings, Especially Women and Children, and on the regional launching of the AU.COMMIT as well as raise awareness of the AU’s continued commitment towards addressing the problem of trafficking in human beings throughout the continent.

For three days, participants at the workshop are expected to finalise and agree on the roll-out of the implementation mechanism of the Ouagadougou Action Plan as agreed at the workshop held in Abuja in March 2010.

The workshop ends on Wednesday 8 December 2010 at the IGAD Secretariat conference hall.