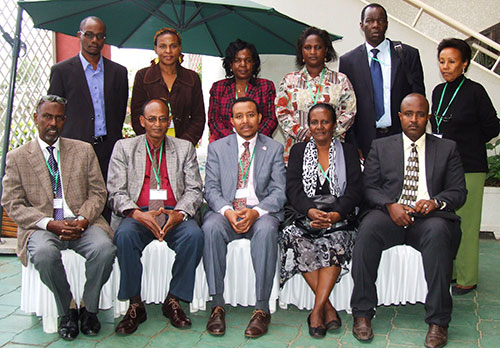 Code of Conduct considered and fine-tuned

The Peace and Security Division of IGAD Secretariat through the Political Affairs Program facilitated the development of a Regional Code of Conduct on Election Observation and Guidelines for Election Observers.

The 45th Regular Session of the IGAD Council of Ministers that took place in July 2012 in Addis Ababa, Ethiopia, while commending the activities undertaken in the area of election observation thus far, recommended that the Secretariat develops its own Code of Conduct and Guidelines for Election Observation.

The consultant developed the requested draft documents, hence, the Secretariat organized a workshop from 11th -13th  March 2013 in Addis Ababa for representatives of member states to consider and validate the draft documents and the documents were validated.

The same meeting requested the Secretariat to convene a workshop for Legal Experts to consider and fine-tune the documents and facilitate presentation to the Council of Ministers for approval in accordance with IGAD’s procedures.

Accordingly, the Secretariat convened a workshop from 28th -29th August 2013 in Nairobi, Kenya, for Legal Experts and the draft documents were considered and fine-tuned. The workshop was attended by Senior Legal Experts from National Parliaments, Election Commissions Foreign Ministries of Member States.

The workshop was chaired by H.E. Dr. Addisu Gebregziabher, Deputy Head of the National Election Board of the Federal Democratic Republic of Ethiopia.