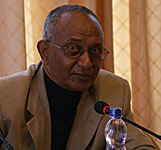 Intergovernmental Authority on Development (IGAD) Committee on Early Warning and Response (CEWARN) said it is taking measure to address conflicts along the border of member states.

Speaking at the 7th meeting of the Technical committee on Early Warning and Response here on Monday Ethiopian Special Envoy to IGAD ambassador Brook Debebe said the institutional capacity of CEWARN has been strengthening in handling conflict management.

Clashes among pastoralist communities mostly occur because of natural resources mainly pasture and water, he said and added these resources are further dwindling due to environmental calamities.

He said hopefully the forthcoming Copenhagen conference will come up with positive outcomes.

Acting Director of Peace and Security IGAD, Yufnalis Okubo on his part said pasture and water are the major cause of conflicts in the region.

IGAD is implementing short and long term plan to address conflicts, he said.

The director said a series of discussion have been held among communities, clan leaders, neighboring states as part of this effort to address issues.

He said the major challenges include among others, limitation of natural resource, weak administrative bodies and movement of illegal light weapons.

However, he said awareness rising among pastoralists, development of infrastructure facilities and expanding cooperation areas among IDAG member states are underway to address the problems.

Representatives from civic associations, donors and international agencies are taking part in the three days meeting.