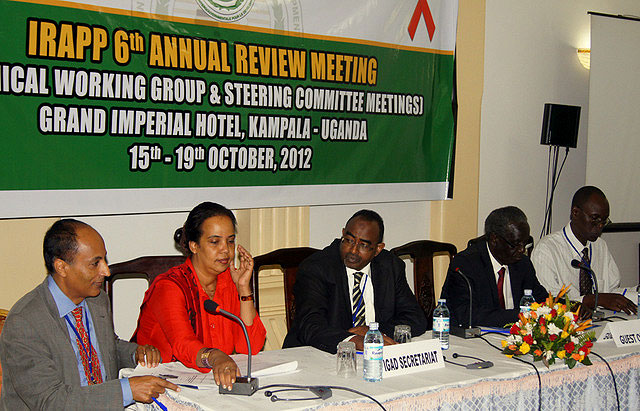 A five-day meeting to review the progress of the IGAD Regional HIV and AIDS Partnership Program (IRAPP) for the period between July 2011 and September 2012 started today in Kampala with an appeal to the World Bank to consider continued support to the program as the Canadian International Development Agency facilitates the continuity of activities in the 18-month transition before the second phase.

Opening the meeting, Dr. Kihumuro Apuuli, the Director General of the Uganda AIDS Commission applauded the World Bank for financial and technical support that IGAD Member States have received, pointing out that there is improved HIV service delivery in the identified hotspots.

He further stated that the fight against the scourge requires innovative approaches to address the sources of new infections, especially the cross border and mobile populations that IRAPP is targeting.

“We have realized increased continuity in service delivery as a result of harmonization of HIV and AIDS protocols and guidelines especially to the long distant truckers, the sex workers and the cross border and mobile populations,” highlighted the Director General, explaining that a trucker can now refill his/her ARV at any service delivery point across the borders in the region.

Other speakers at the opening ceremony included Dr. Peter Okwero of the World Bank, Ms. Fathia Alwan of IGAD and Dr. Ahmed Hassan Ahmed of IRAPP. The meeting of the Technical Working Group precedes the one for IRAPP Steering Committee to be held on 18th and 19th October 2012 in Kampala.