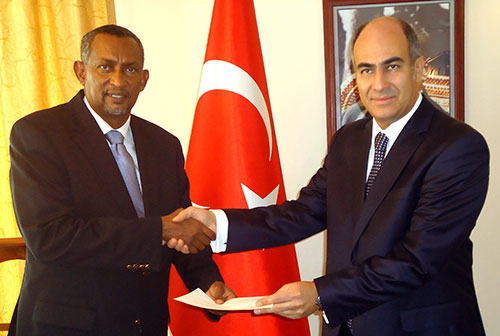 The Ambassador delivered his letter to H.E. Amb (Eng.) Mahboub Maalim, the Executive Secretary of IGAD on December 17, 2014 in Addis Ababa Ethiopia.

During the  meeting of the  two sides  held  at  the  Embassy of Turkey   in Addis Ababa, the  Turkish Ambassador   expressed his gratitude  to  the IGAD Executive Secretary  for his continued interest   to work with the Turkish.

The  Ambassador re-affirmed the  dedication of his Government to continue its  investment  for  the re-building of  Somalia  and  to support  the  efforts  of IGAD   to create sustainable  peace in the country and the region  as well.

H.E Ambassador Mahboub, in his turn  expressed his  gratitude for the Turkish Government  for officially accrediting its Ambassador  following the departure of the previous  Ambassador as this signify the continuity of  the commitment  by the  Turkish  Government  to  work with and support  IGAD.

Finally both sides have agreed to set time to review the status of the MoU signed between the Turkish Government and IGAD for enhanced cooperation.